The front yard of this mid-century home's garden went from weedy to wonderful. The secret is low-maintenance plants that provide color all year. 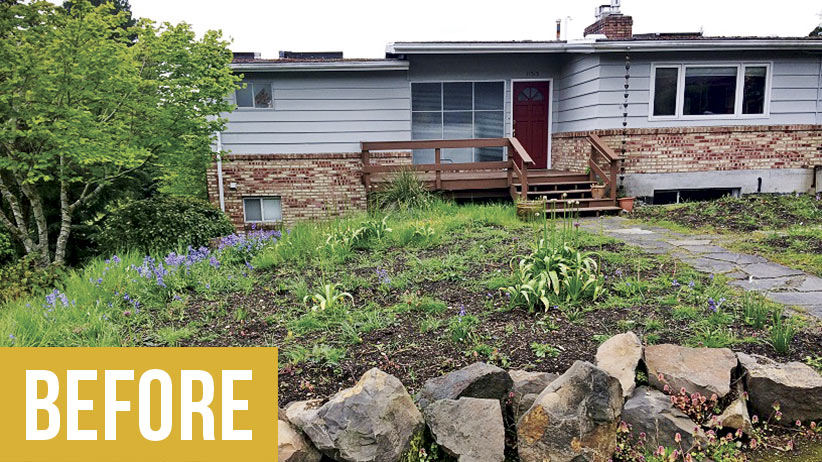 Mid-century home gets a garden makeover

When Kristen Capka bought her mid-century Washington home, it was clear the yard needed some love and attention to turn up the curb appeal and create a fresh, contemporary look that reflected the home's style. She and landscape designer Courtney Olander set to work turning the drab one-story home with a neglected front yard into something special. Comparing the before photo with the after, you might not even think it’s the same place! Take some cues from Kristen and Courtney to learn how to transform your curb appeal and design a garden that complements a mid-century modern look. 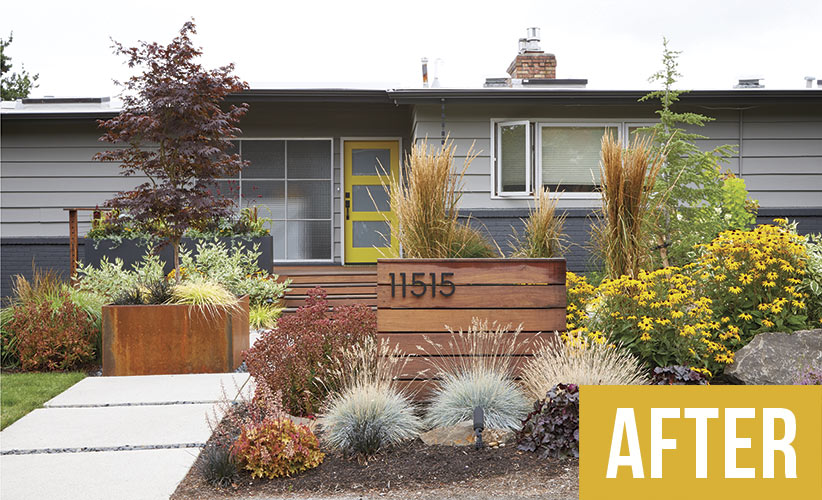 Kristen’s goals were simple — she wanted lots of color all year but with a low maintenance planting that didn’t add more to her busy schedule. That’s where Courtney came in, providing ideas and sharing her experience, simplifying what can feel like an overwhelming task. Making big decisions up front saves a lot of hassle and reconfiguring later so Kristin and Courtney worked together to come up with this checklist of goals to create a head-turning mid-century garden. 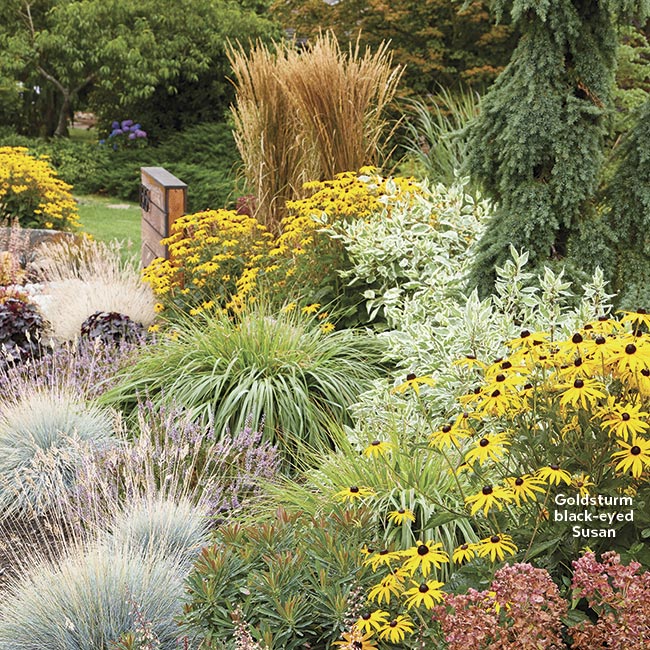 Deciding first which colors you will or won’t use helps achieve a cohesive look and increases the curb appeal dramatically. It makes choosing plants a lot easier, too, since you’ll know which flower or foliage colors to look for and which ones to pass by.

Since the yard was a blank slate, Courtney and Kristen started with the house color and then coordinated the plantings from there. If you have an established border and house colors you can’t change, just take a look at the bed and see if there are colors you need to edit out and replace with something that’s more in tune with the siding.

Kristen really wanted a contemporary feel for the front yard that reflected the mid-century home so she and Courtney did a lot of research by looking at magazines, browsing online and searching on Pinterest for style inspiration and color palettes. As a result they decided to paint the lower portion of the house a darker shade of gray. It’s less distracting than the previous brick color and makes a good backdrop for the garden.

The new door cried out for a funky new color to add a spark. She chose Sherwin Williams® Citronella — it had just the right look and really pops against the house, leaving no doubt where the entrance is. Repeating the color with the almost-matching ‘Goldsturm’ black-eyed Susan (Rudbeckia fulgida sullivantii) in the beds creates a connection between home and garden. 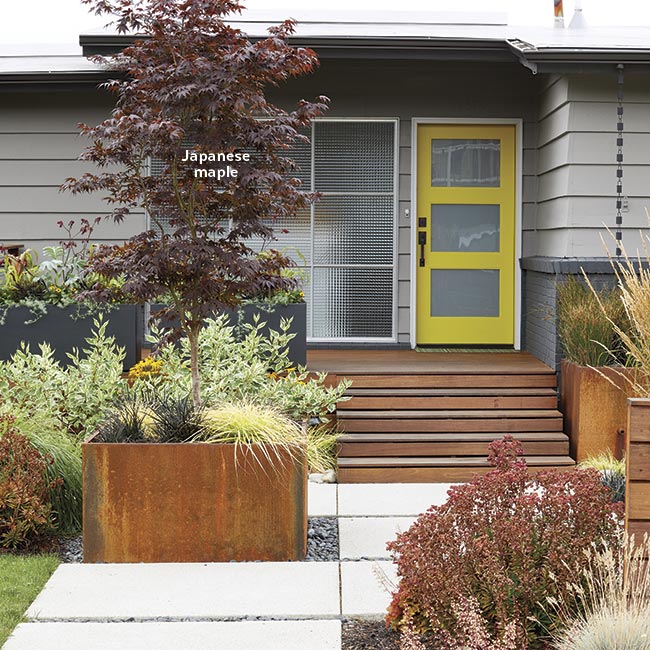 With color decisions in place, the next big project was replacing the walkway to the front door. The original was simply too narrow. As a rule of thumb, Courtney makes a front walk wide enough for two people to walk side by side. So these large concrete pavers are 5½ feet wide. Two smaller gravel paths that run parallel to the front of the house make it easy to get to the driveway and around to the backyard.

The planter with the Japanese maple (Acer palmatum) was put in place to screen the view of the front deck. So the walkway has to jog to the right to go around it. But that's OK, it slows visitors down to enjoy the different views along the way to the door. Made of rusted Corten steel, this planter goes perfectly with the garden's color palette, and its simple straight lines reinforce a modern look. Courtney likes that it has a lot of substance — it’s an object you really notice and have to navigate around; a low planting bed would be easier to ignore. 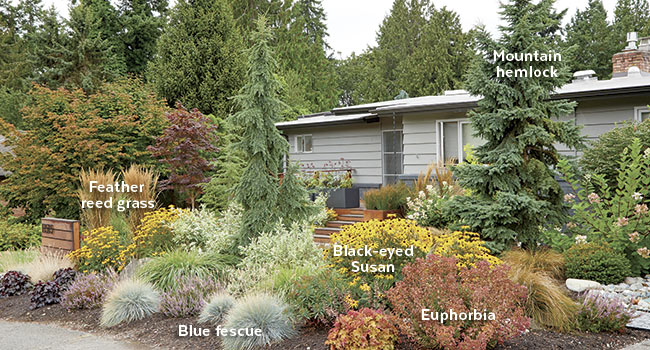 The yard was full of weeds when Kristen bought the house, and the only plants worth keeping were three mountain hemlocks (Tsuga mertensiana). Whenever Courtney finds them in a client’s yard she says, “Keep them!” because they take a long time to mature. With a gorgeous irregular shape, silvery blue-green needles and drooping branches, it’s an elegant multiseason plant. Mountain hemlock is native to the mountains of the West Coast and grows happily in well-drained soil with regular moisture and a cool climate. Adding an evergreen or two suited to your garden’s growing conditions will ensure you have interesting views in the garden during all four seasons.

The mountain hemlocks inspired Courtney to create a planting for this mid-century home that’s reminiscent of a mountain meadow. Using grasses and flowers organized in a loose, casual way the planting contrasts with the geometric shapes found in the paths, planters and even the house. Mounded and draping plant shapes also help soften the hard lines and help make the front yard feel more approachable — welcoming you in to see what you might discover.

With long-lasting ‘Karl Foerster’ feather reed grass (Calamagrostis x acutiflora) and ‘Goldsturm’ black-eyed Susan (Rudbeckia fulgida sullivantii) and lots of gorgeous foliage, summer is the most colorful season here. But this garden still has plenty to offer in spring. Blue fescue (Festuca glauca) is a cool-season grass that is at its brightest then. Spring also brings blue and white hybrid columbine (Aquilegia hybrid) blooms, though the plants sometimes go dormant by summer. Euphorbia’s (Euphorbia martinii) chartreuse flowers are eye-catching in spring and hang on all season, aging to brown like those above, adding a big dose of texture to the late season garden. 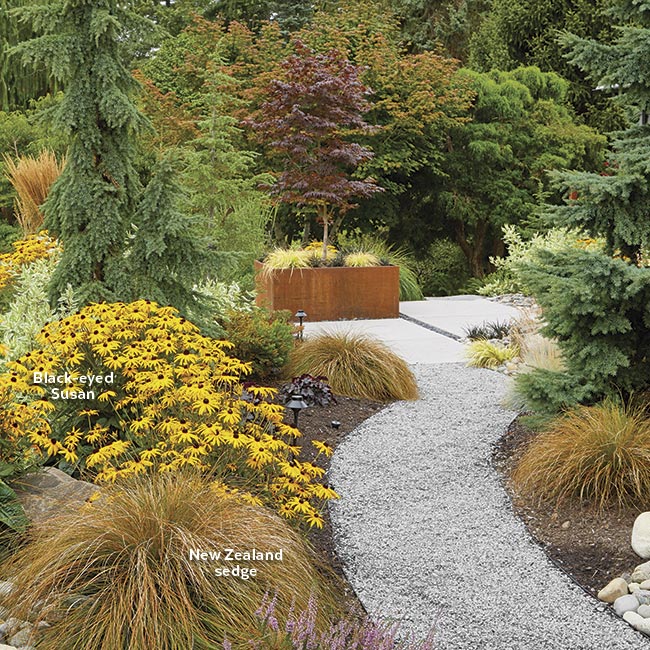 This front yard is about as easy-care as it gets. The evergreens don’t need pruning, there are few plants to deadhead and all are pest- and disease-resistant. To keep this garden looking good, Kristen cuts back the spent ‘Goldsturm’ black-eyed Susan stems, removes damaged growth from the heather and trims back ornamental grasses back to the ground in late winter.

There are several varieties of sedge in the garden that add color without the work. New Zealand sedge (Carex testacea) is one that provides four season interest with its draping habit and brown-highlighted-orange leaves. In this mild winter area it is evergreen and, like the blue fescue, there’s no need to cut it back. Just run a rake through the foliage a few times to remove any dead leaves. 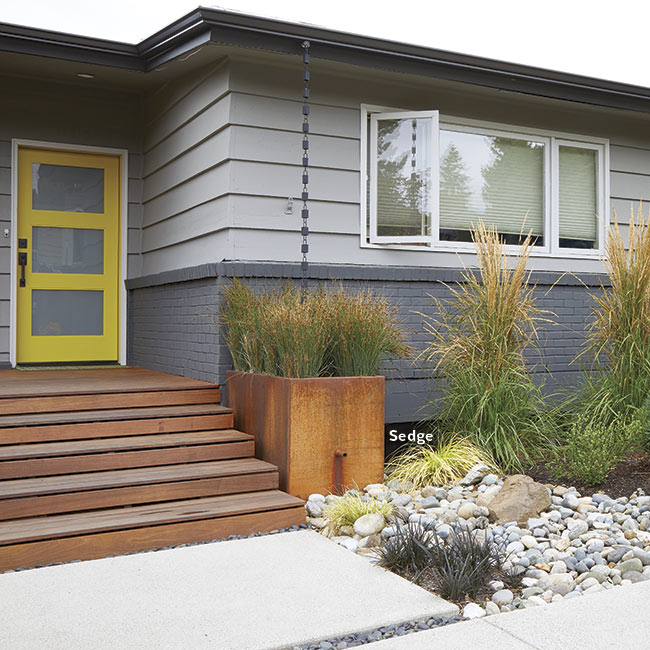 Deal with the water drainage problem

When Kristen bought the house there were drainage issues because of a rain chain that directed water to the foundation of the house. She replaced the rain chain with a new one and Courtney came up with a solution to direct the water away. This chain leads into the steel planter filled with rushes (Juncus inflexis). Now anytime it rains, the water-loving rushes get a good drink and if there’s a downpour, excess water is directed out the spout at the bottom of the planter box into a dry streambed and away from the house.

Now that you have this checklist for great curb appeal, you can use it to create a head-turning front yard of your own.

How to Plant Native Plants in Natural Layers

Botanic Gardens To Visit in the U.S.

Whether you have all day or just an hour or two, botanic gardens are a great way to spend some time and expand your horticultural horizons.

Bursting with blooms and a sophisticated French-inspired style, this rose garden is made for getting away without leaving the comfort of home.

How to Choose the Right Firepit

Ready for a firepit in your garden? Let us help you choose the right style and show you some must-have accessories for any perfect garden firepit experience.