With a lot of hard work and creative use of their on-site resources this couple created a beautiful Southern shade garden. Take a tour!

When Donna and Richard Priester decided to dress up the view from their kitchen window with a simple backyard bed, they had no idea how it would change their lives. Now, 20 years later, their backyard garden reflects a passion for gardening and a true partnership.

The large trees and creek that runs across the back of the property sold Donna and Richard on this house near Nashville, Tennessee when they bought it 20 years ago. The combination of shade and moving water made it a peaceful and relaxing place—a good beginning for any shade garden. 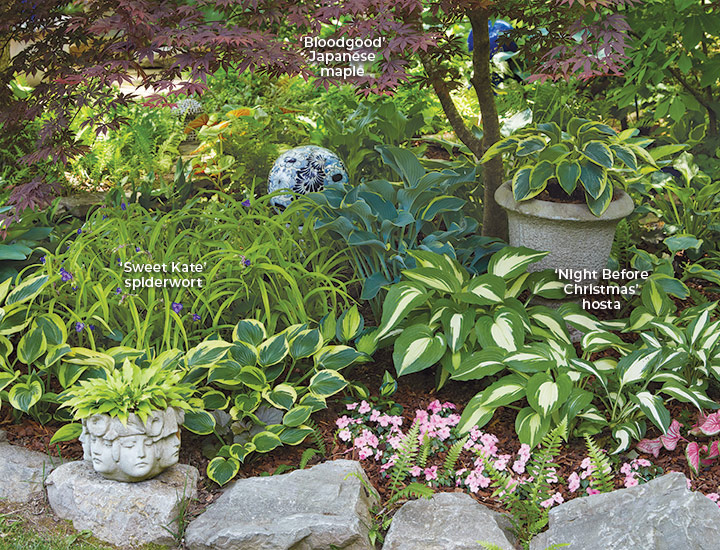 Hostas (Hosta spp. and hybrids) were one of the first shade plants Donna and Richard grew, and they’ve been adding to their collection ever since. The success of those early plants inspired the purchase of new and different varieties. So the garden grew and evolved as Donna and Richard said to each other numerous times, “This hosta would look nice over there.” In fact, the bed above came about because Donna came home with an entire flat of ‘Night Before Christmas’ hostas that needed to go somewhere. 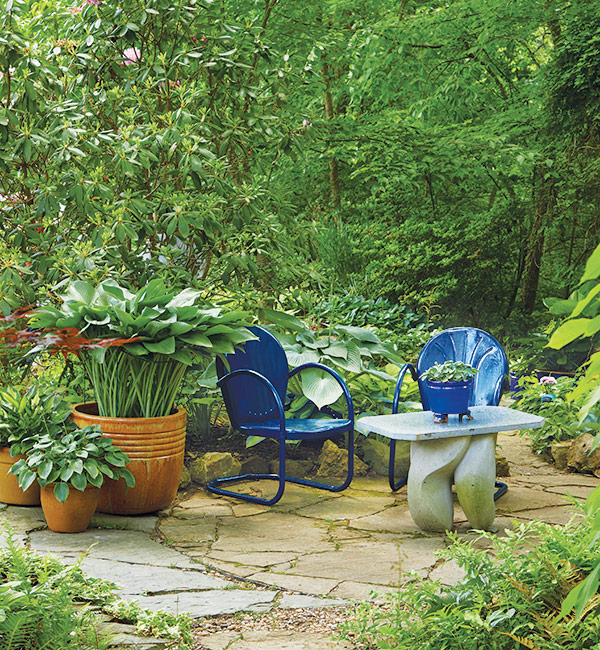 Take a seat in the shade

Toward the back of the yard, under a canopy of trees and an old rhododendron (Rhododendron spp. and hybrids), you’ll find the little seating area in the photo above. Donna and Richard built it here because it offered a good view of the garden and the shade is dense, which makes it a great place to take a break on hot summer days. Plus, you can hear the creek, which isn’t too far away. The blue chairs add to the cooling feel. Containers filled with hostas tie the garden and patio together. Elegant, upright ‘Krossa Regal’ adds height and screens the view of the chairs for an almost hideaway effect. Donna grows lots of hostas in containers and has shared her tips below.

Tips for growing hostas in containers

In this USDA zone 7 garden even the ceramic pots stay right where they are through winter with no need for protection. Here’s what Donna does to keep her container hostas growing happily for years:

Donna adds pine bark fines and sand to the potting mix to increase the drainage and make it a bit more acid — no specific recipe, just mix thoroughly until it has a coarse texture.

Apply a slow-release fertilizer in spring and top dress the potting mix with compost every few years to provide nutrients. In addition, Donna foliar feeds each year in mid-June using a liquid plant food for tomatoes. She’s found that this formula deepens and intensifies foliage color.

If there isn’t much rain late in the season, make sure to keep watering. Hostas with dry potting mix going into winter are less likely to survive. Note: In colder zones, overwintering perennials in pots is a bit more difficult. But you’ll have the best success in a spot with some protection from cold and with frost-resistant pots, such as plastic or fiberglass.

If there’s one thing Donna would do differently in her yard, it would be to add an underground irrigation system but that seems too complicated now. Instead, they’ve come up with a few water- and work-saving strategies. Soaker hoses snake through the beds to cut down on hand watering. These minimize moisture loss from evaporation and keep water off the foliage so diseases, such as powdery mildew, don’t become a problem. Two 80-gallon rain barrels next to the house also help reduce the water bill. Donna and Richard started with one, but a couple of downpours convinced them to add another—rain barrels fill up quickly!

Donna broadcasts slow-release fertilizer in spring. Then every three years she adds a few shovelfuls of composted horse manure around each plant. 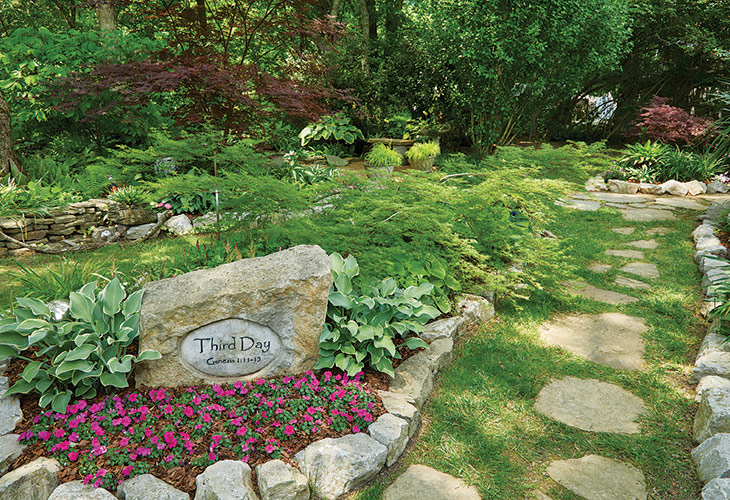 Donna says the biggest challenge in this shady yard isn’t the lack of sunlight, but dealing with all the tree roots. The centerpiece of their garden is a 300-year-old chinquapin oak( Quercus muehlenbergii), and the last thing they want to do is damage it. At planting time they often have to adjust the position of a plant to avoid large roots. Raised beds created by the stones you see above also help. The stones are around 12 inches thick, which makes the beds deep enough that Donna and Richard can plant in them without disturbing the tree roots.

To build a bed, Richard lays out the shape using a hose. Sometimes he drags the edge of a shovel across the lawn, which leaves a narrow groove he can follow. Once the edge is defined, he digs out the turfgrass, being careful not to go too deep. He saves as much soil as possible and then amends the area with composted horse manure and peat moss.

Richard has hauled and carefully placed every stone you see surrounding the beds in this garden. Depending on the size of the stone and where it was, he lifts it himself or gets out the wheelbarrow or dolly to move it into place. Donna and Richard like to use what they already have as much as possible, so most came from their property. But he’s also salvaged rock from nearby construction sites. (The site managers are usually happy to have him haul it away – it saves them the trouble.) Donna and Richard like using the local stone because it fits with the setting and adds to the rustic charm of the garden. The only stone they purchased was the Alabama flagstone for the paths and patios. 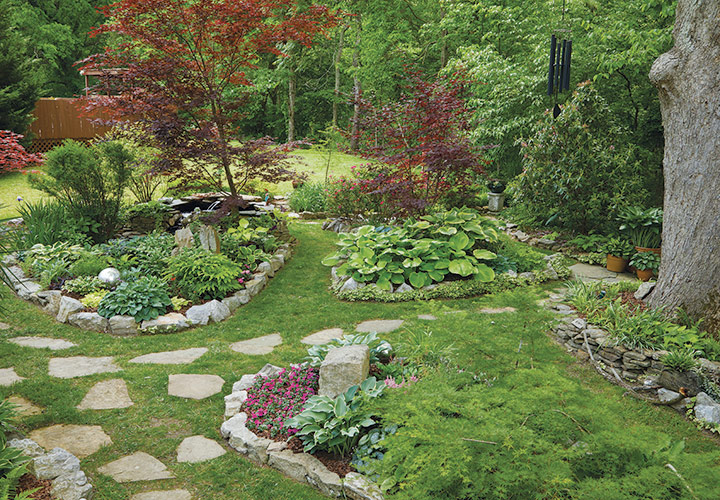 These paths weren’t laid out on graph paper — they’re just the natural foot traffic pattern Donna and Richard created as they traversed the garden. They added the flagstone pavers to give the garden a more polished look and prevent the turf from wearing down. And because the garden has been on numerous tours, the paths give visitors a clear place to walk and steady footing. Donna likes to say they’ve created a strolling garden—a place where it’s easy to wander and enjoy the variety of textures that make shade gardens so interesting.

Gardens are always changing and Donna and Richard are always making adjustments. One of the beds suddenly got a lot of morning sun on one end when a neighbor removed a large tree. So they relocated the shade plants that had been there and planted several sun loving Knock Out® shrub rose (Rosa hybrid) in their place. 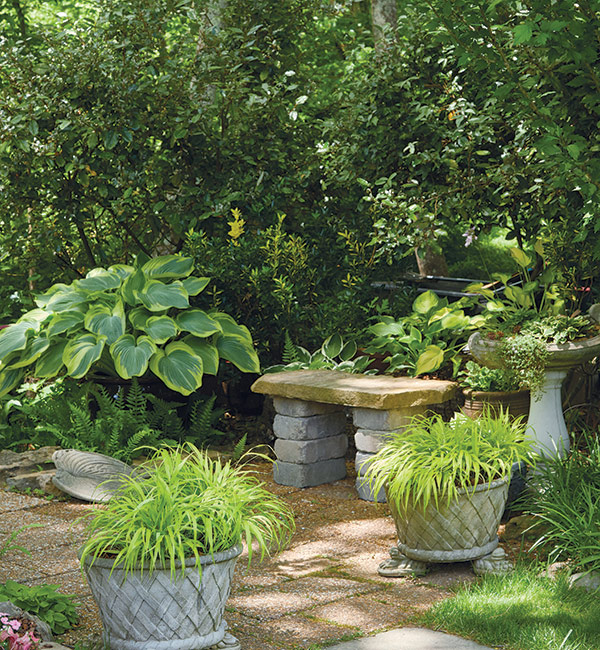 One path leads you to the bench above. Richard constructed it from pavers with a little mortar to keep them together and a flat stone on top. It’s a pleasant place to sit and enjoy a panoramic view of the garden. 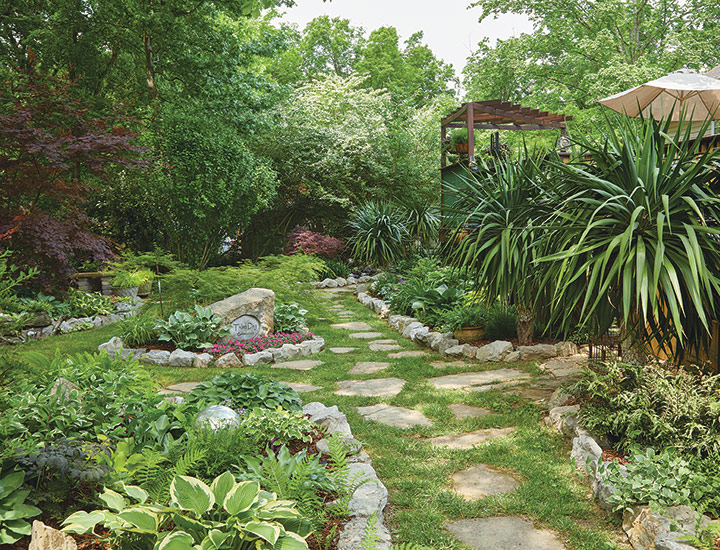 A deck with a view

The deck above is where Donna and Richard have dinner, relax and enjoy the garden from a different perspective. With this overall view of the garden it’s easy to consider changes they could make or focus in and reflect on plants that have fond memories attached to them.

Yuccas (Yucca spp.) may not be a common shade plant, but the ones in this yard are doing just fine. This part of the yard gets a little more sun than others. They’re here because Donna spotted them in a pile as she was driving by the site of a local business that was being torn down. Those plants had been there for years and she remembered being fascinated with the tall flower spikes as a child. So she quickly called Richard and he hauled them home. Since they were busy at the time and didn’t quite know where to plant them, the plants sat in a pile on top of the ground through winter. By spring, Donna assumed the plants had died but then she noticed some green growth and they quickly got them in the ground — they’ve been doing great ever since. The yuccas’ strong architectural shape and height now help unite the deck and garden. In addition, the plants’ determination to live was an inspiration to Donna, who remembers them when things don’t turn out as planned.

Gardening is a family legacy for Donna — both her father and grandmother were gardeners. She has fond memories of following her father through the garden as a child as he tended irises (Iris spp. and hybrids), roses, fruit trees and many other plants. The trees were so productive that her mother would set paper bags out on the porch so the neighbors could harvest their own. As a little girl she was fascinated with the four o’clocks (Mirabilis jalapa) and carefully watched the clock to see if they actually opened at 4 p.m. — and they did! Now she grows some of her own and smiles at the memory.

If you wish your garden had more pop in fall, check out these 10 spectacular flowers and plants that will highlight your late-season borders.

Garden compost has so many benefits. We've compiled a helpful guide with all the basics and a few troubleshooting tips that can help too!

How to Save Tender Summer Bulbs for Next Season

Do you grow summer flowering bulbs like canna, dahlias and glads? Find everything you need to know about saving these tender summer bulbs, corms, and tubers to grow again next year.