Boxwood blight is a disease that can quickly ruin a gorgeous garden. If you’re growing boxwood, you need to read this and learn what to do about boxwood blight. 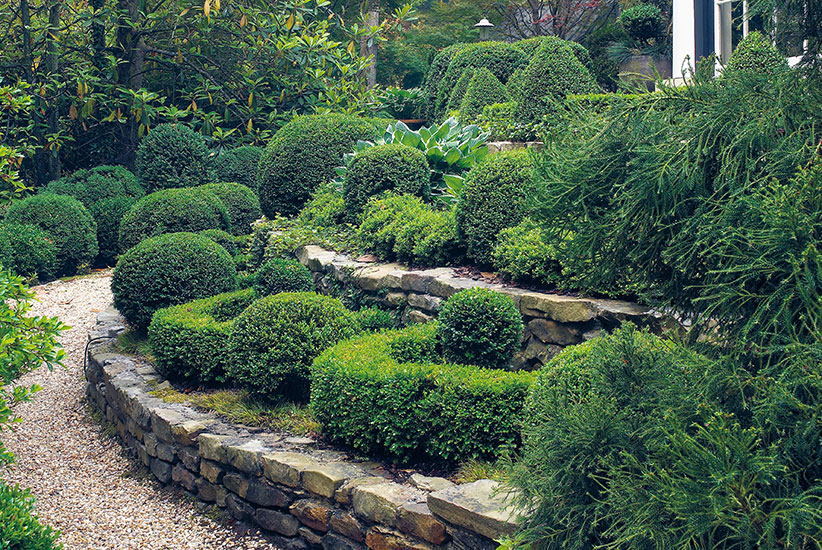 Boxwood blight is a fungal disease spreading quickly across North America. Gardeners who rely heavily on boxwoods are really struggling. We haven’t seen this disease’s devastation in our Iowan test garden yet, but I need to plan how to fight it when it comes. You’re fighting boxwood blight in your garden or, like me, you want to know how to prevent the disease from infecting your garden, let me help. We’ll walk through what to do about boxwood blight below, and don’t miss my lists of cultivars that are resistant and similar plants that make great boxwood replacements. 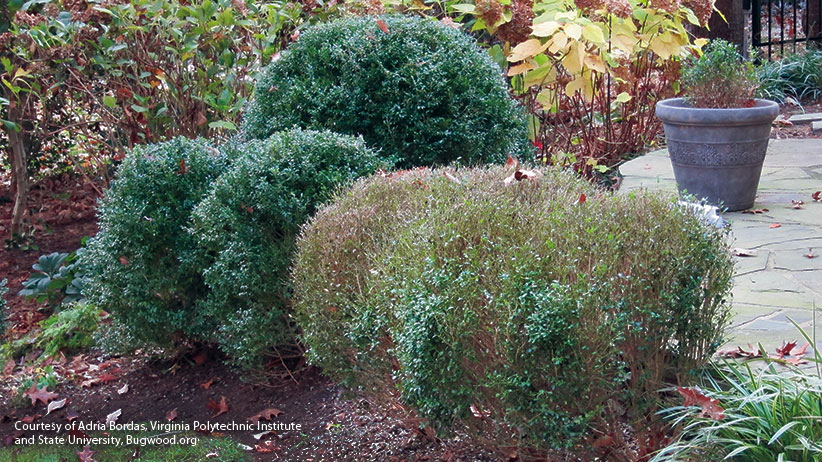 What is boxwood blight?

Boxwood blight is caused by the pathogen Calonectria pseudonavicu-latum, and will also affect other shade-loving plants like sweet box and pachysandra. The photos below show the progression of symptoms: First you’ll notice circular lesions with dark brown edges on the leaves and black streaking on the stems. As the disease spreads, foliage turns straw-colored, then falls off. Sometimes this can be confused with volutella blight or winter burn; a tissue test at a plant disease diagnostic clinic can confirm boxwood blight.

How does boxwood blight spread?

Boxwood blight is spread by contact with infected plants from nurseries, tools, clothing and even greens in holiday decorations, such as a wreath or center-piece. Spores can persist in the soil for up to 5 years, so even a new boxwood planted where an infected plant was removed can become diseased. There is no cure, so you will need to either begin treatment if you have too many plants to lose or remove the entire plant. 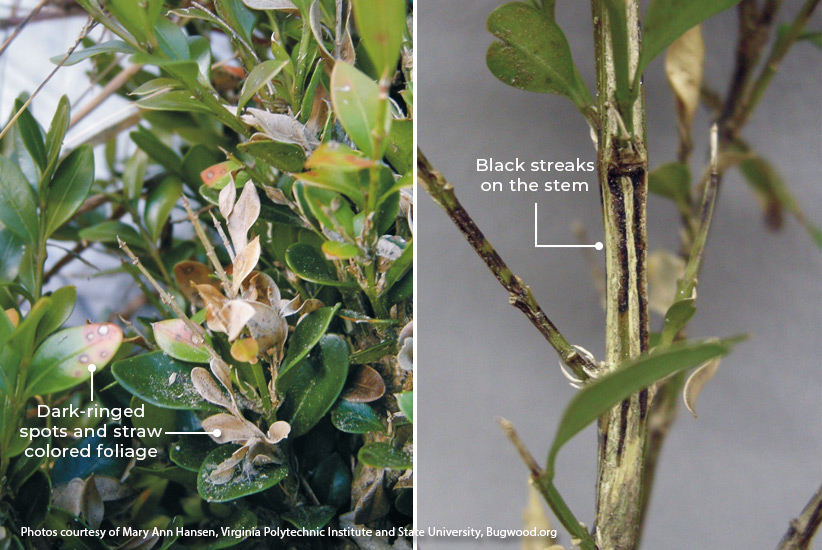 If the infection is in the early stages, cut off all affected branches and clean up debris off the ground. Double bag the trimmings and dispose of them in the trash, burn (where permitted), or bury them at least 2 feet deep in the ground. Don’t compost infected foliage. You may be able to keep boxwood blight at bay on remaining unaffected foliage by spraying a chlorothalonil-containing fungicide every 7 to 14 days during the growing season when temperatures are above 60 degrees F. Reapply if it rains — the fungus thrives in warm, humid weather. Use this fungicide carefully according to directions, as it is toxic to fish.

Sanitize any tools that you use with a 1:9 bleach to water mixture and wash clothing that comes into contact with infected plants. All that said, it might be easiest (and definitely less expensive) to remove the whole plant, including any soil touching the roots.

Boxwood cultivars that are resistant to boxwood blight

There are several boxwood cultivars that are resistant to boxwood blight:

Plant resistant varieties in new plantings, or use them to replace a dead plant in a hedge. Keep in mind that though these cultivars are resistant — they don’t usually display the symptoms — they can still spread the fungus to nonresistant boxwoods. They may also need fungicide applications to suppress the disease if symptoms show up, but these cultivars rarely show the same kind of devastation.

How to prevent boxwood blight

If you don’t have boxwood blight yet, here are some things to help minimize your risk:

Get the same look with these boxwood replacements

If all else fails and you lose your beloved boxwoods, you can plant these lookalikes without fear of boxwood blight. With leaf shape and texture resembling boxwood, these plants can be shaped and sheared the same way for that great formal look. Until researchers can find a cure for boxwood blight, use these tips to fight hard for your boxwoods.

A cross between an Osteomeles and Pyracantha, this evergreen shrub with glossy leaves can be easily trimmed to a shape or sheared into a hedge. It has a mounded habit and doesn’t form flowers.

Naturally columnar, Sky Box lends a formal air to a planting. It has tightly branched evergreen foliage and its insignificant white spring flowers lead to inedible blue berries. Sky Box and Juke Box are part of the “Box” line of shrubs that are all good boxwood replacements.

Get a compact, mounded hedge, plus sweet, tasty blueberries with this acid-soil-loving bush. Dark green foliage turns red to purple in fall and white flowers ripen into edible fruit.

If both the male and female plants of this evergreen shrub are close together, the female will have bird-attracting red berries in the fall. Its dense foliage has red-tinged new foliage growth and white flowers in spring.

How to design with goldenrod

How to Save Your Container Plants Over Winter

Plants to Pair with Ornamental Grasses

Learn how to make a simple but stylish DIY terra-cotta bird feeder using an orchid pot. It will look great in your garden and the birds will love it, too!

Find the Right Bulb for Your Garden

Find the right bulb and the right spot in your garden to plant it with tips and recommendations from Judy Glattstein, author of Bulbs for Garden Habitats.