Did I Plant That?

Jamie's almost positive she planted the row of plants coming up in her garden, but her neighbor thinks differently...

Did I plant that?

In my first garden, I carefully mapped out what I’d planted and where I’d planted it. I drew pictures and created a color-coded key that matched the stakes my kids had decorated. It was a thing of great beauty and organization.

Several weeks later, a perfect row of something started to grow in a space where there should have been nothing, according to my Holy Grail of Garden Maps. Worried I had forgotten a vegetable on my diagram, I let it grow because weeds don’t push through the soil in straight lines, right? For a month and a half, I let this mystery row grow taller and taller.

My neighbors, longtime gardeners, would stop over many evenings, beers in hands, admiring my seedlings, and complimenting me on the nice job I had done. I beamed. I was certain this garden was going to be one for the history — or botany — books.

An expert weighs in

One evening in June my kids were helping me water (read: running through the sprinkler), and my neighbor wandered over to talk shop. We chatted about the weather, how to keep the deer from snacking on our beans, and other important “gardeny” things that I was doing my best to keep up with.

He nodded his head toward the mystery stalks, which now stood knee high, and casually mentioned, “I think you might want to pull those. They look like velvetleaf.”

“I don’t know,” I answered, feeling slightly defensive about these somethings that towered over my broccoli plants. (I had become weirdly invested in what these would become.) “Weeds wouldn’t grow in such perfect lines. I think I’ll leave them for now and see what happens.”

He smiled and nodded and went on chatting about how much we needed rain.
Several weeks later, when I was picking my very first tomatoes, my neighbor strolled over to congratulate me, and again he nodded toward the row of plants that now came up to my hip.

“Are you sure they’re something you planted? Those really do look an awful lot like velvetleaf.”

“I’m not sure,” I admitted. “But I think I’m going to wait a little longer.” He smiled and nodded and went on chatting about tomatoes and blight and a natural baking soda remedy he might try. 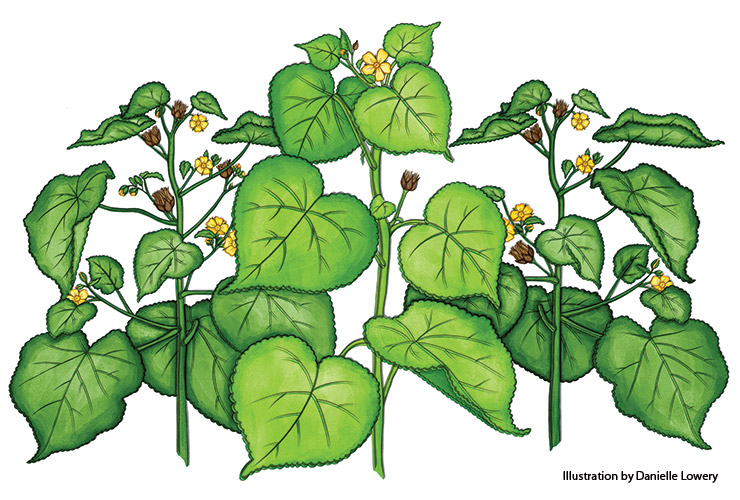 Midsummer, a friend stopped to visit, and we ended up in my garden. “How long you been growing the velvetleaf?” he joked, pointing to the tallest row in the garden. I closed my eyes in humiliation and defeat.

If this friend who knew very little about gardening could confirm what my neighbor had been kindly trying to tell me for months, I had no choice but to give up the fight. The lesson I learned that day was to listen to veteran gardeners, especially when they’re speaking so kindly to you. If they tell you “It’s velvetleaf,” it’s probably velvetleaf.

When Jamie isn’t hunting down seedlings of velvetleaf (Abutilon theophrasti) in her garden with the wrath of a thousand fiery suns, she’s hanging with her kids at the pool to pick up funny bits she can use in her next young adult novel.

You Might Also Like:
Identifying Weeds in the Garden
10 Invasive Plants to Avoid in Your Garden
Poison Ivy Look-a-likes

The Dog Days of Summer

The Tale of Two Lima Beans

Stephanie Rose of Garden Therapy specializes in using her herb garden to create natural housekeeping products. She shares 3 ideas with us here!

Jamie's husband isn't ready to share, his apples, no matter how cute the "borrower" is.