Identifying Weeds in the Garden

To pull or not to pull? Identifying weeds and perennials in spring can be tricky. We’ll show you photos of commonly confused plants and what to look for. 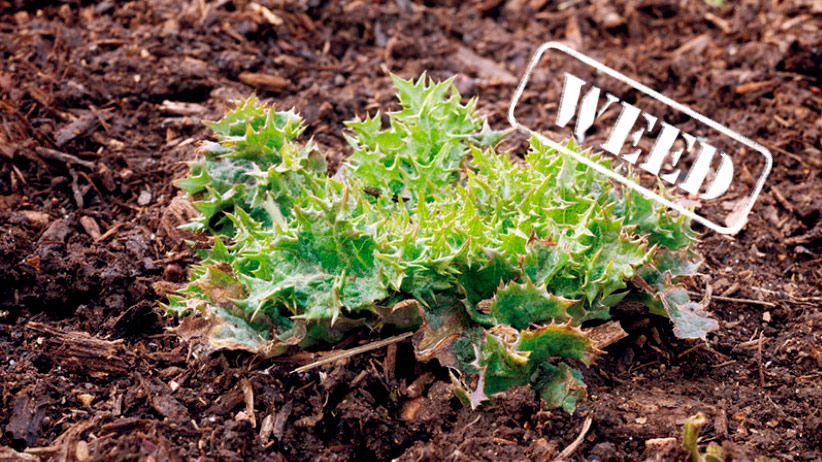 Can you identify a garden weed from a perennial?

Is that the new perennial you planted last year just peeking out of the ground or a pesky weed trying to get a foothold in your garden? Could your favorite flower be reseeding, or is it a weed? It can be hard to tell! Take a look at this photo guide, and next time you go out to your garden you’ll be able to identify which plants to keep and which ones to pull.

You Might Also Like:
Poison Ivy Lookalikes
Your Guide to Japanese Beetles
10 Invasive Plants to Avoid in Your Garden 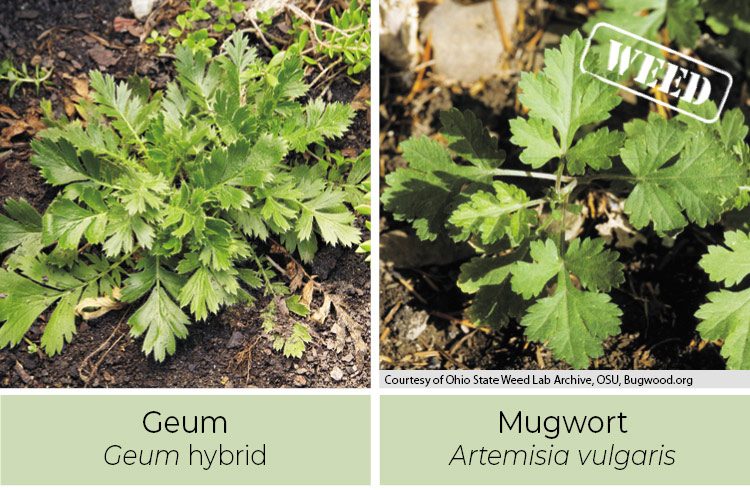 You’re working in the sunny area of your newly planted perennial border when you come across these two plants. Is it the geum (Geum hybrid) you planted last year or is it mugwort (Artemisia vulgaris)? This weed does well in disturbed areas, like a freshly dug bed, though it can work its way into established ones, too.

Both plants do best with regular moisture and well-drained soil, though mugwort seems to tolerate clay or poorer soils better than geum. Mugwort is also more cold-hardy, growing easily in USDA zone 3 while geum tops out at zone 5.

How to tell geum and mugwort apart 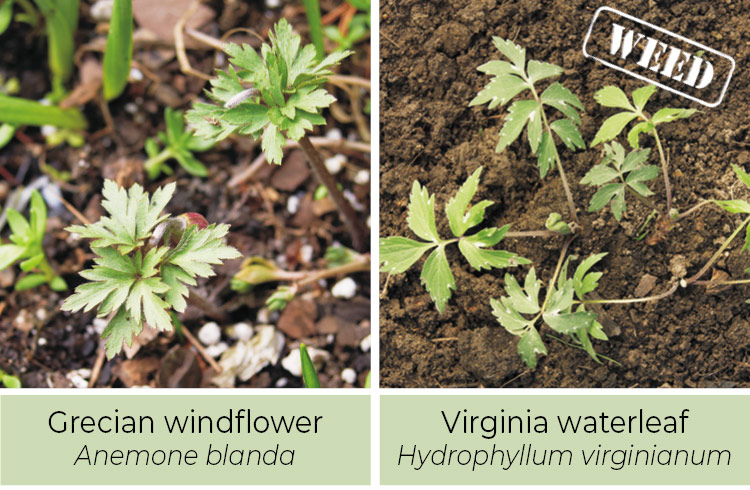 Cleaning up beds in spring, you might notice a grouping of one or both of these. Virginia waterleaf likes moist soil in light shade. But it could be some of those Grecian windflower bulbs you planted a few years ago, too.

If you’re looking for plants that naturalize for your spring garden, you might choose either of these. After all, Virginia waterleaf is native to North America. The only problem is, it tends to take over and crowd out its neighbors.

How to tell Grecian windflower and Virginia waterleaf apart 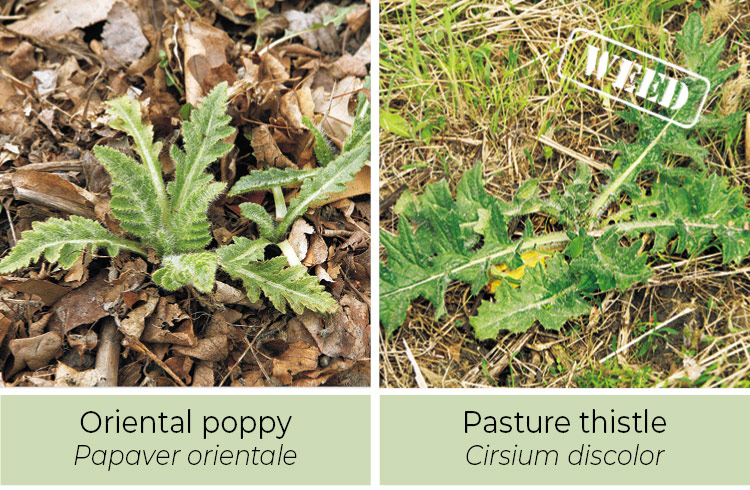 If you’re weeding without gloves, you might notice these plants by touch before you see them — they’re both covered in fine hairs. Which one to keep and which should you get rid of?

Pasture thistle (Cirsium discolor) is a native plant that’s quite aggressive. It prefers the disturbed soil of a garden where it’s easy to reseed, but can also muscle its way into more established situations. This thistle is a favorite of goldfinches. Oriental poppies (Papaver orientale) get pretty numerous, too, but don’t travel as far. Both plants produce rosettes of bristly foliage and have a white underside to the leaf.

How to tell Oriental poppy and thistle apart? 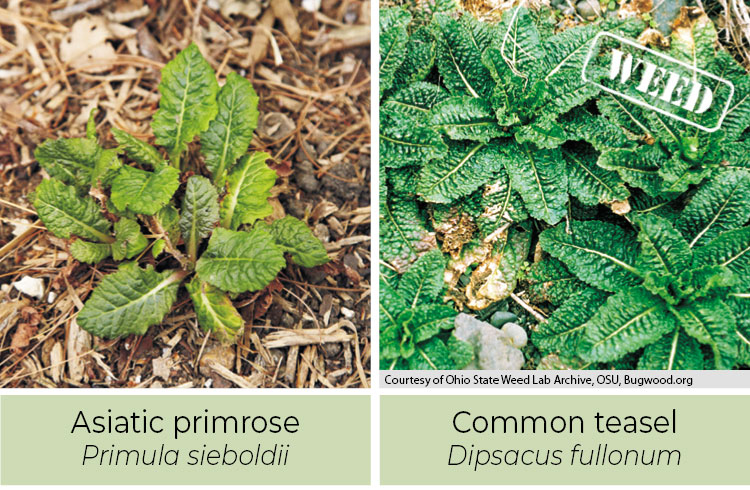 Poking around the leaf litter in spring, you discover some low rosettes of foliage with wrinkled leaves. It could be your favorite primrose like this Asiatic primrose (Primula sieboldi) in the photo on the left or one of the popular Auricula types that look similar. On the other hand, common teasel (Dipsacus fullonum) might have seeded around your garden.

Both plants prefer regular moisture, though common teasel will tolerate clay soil much better than Asiatic primrose. Interesting fact: Teasel’s seedheads are sometimes used in dried floral arrangements (although you probably don’t want it to go to seed in your own garden!).

How to tell Asiatic primrose and commong teasel apart? 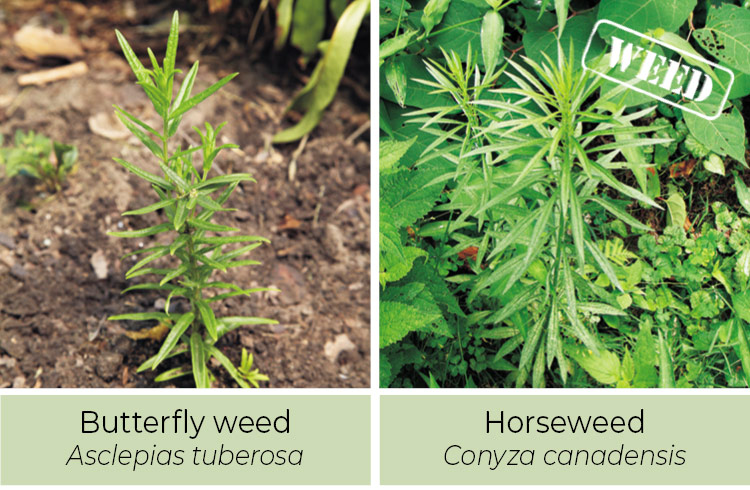 If you suddenly notice there’s a stand of butterfly weed (Asclepias tuberosa) where there wasn’t before, don’t get too excited. It might be fast-growing horseweed (Conyza canadensis) instead of slow-growing butterfly weed.

Good soil and lots of sun will benefit these two plants. They’re both quite drought-tolerant and can even grow in fast-draining poor soil, but clay soil is another matter. Horseweed will still do just fine, but butterfly weed will eventually die.

How to tell butterfly weed and horseweed apart 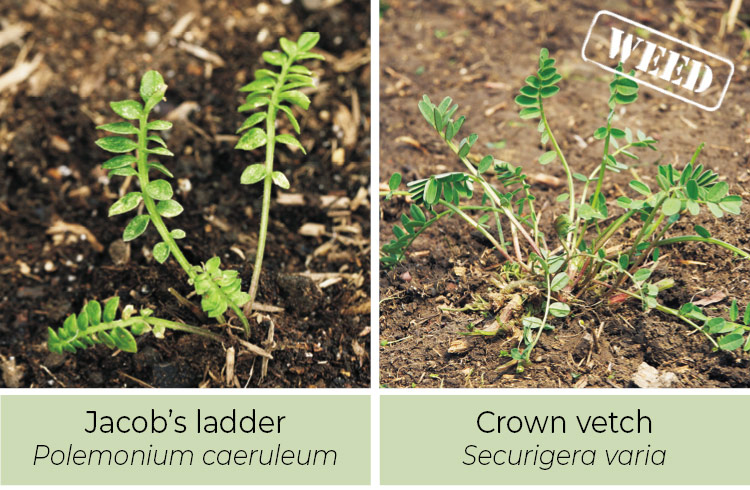 Is there a spot in your garden that stays moist most of the growing season? That makes it a good place to grow Jacob’s ladder (Polemonium caeruleum), but crown vetch (Securigera varia) might happily take hold there, as well.

Crown vetch is an import that’s naturalized in all but four states and most of southern Canada. It tolerates a lot of harsh conditions but truly thrives with regular moisture, just like Jacob’s ladder. And with those small leaves growing directly across from each other, it’s hard to tell them apart.

How to tell Jacob’s ladder and crown vetch apart 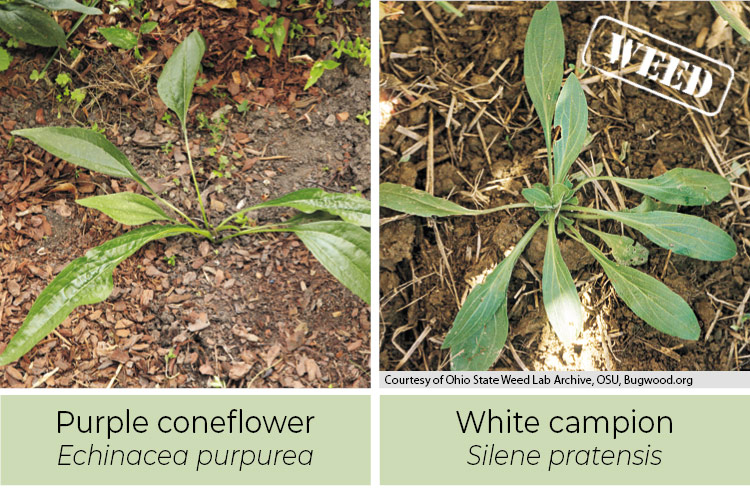 Your full sun border has a nice stand of purple coneflowers (Echinacea purpurea) but you notice a few leaves that don’t look quite right — it could be (Silene pratensis) white campion.

Full sun borders and open meadows are the perfect setting for natives like purple coneflower. Unfortunately, that’s just what white campion likes, too. It’s naturalized through most of North America; so much so that it’s sometimes listed as a wildflower. But it’s quite aggressive in cultivated areas like a garden.

How to tell purple coneflower and white campion apart 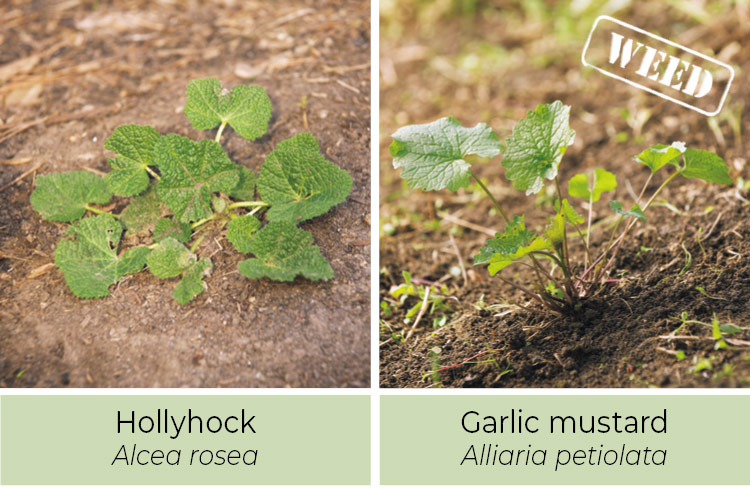 That sunny bed where your hollyhocks (Alcea rosea) grow is also just the place garlic mustard (Alliaria petiolata) loves. This noxious weed emerges with a low rosette of leaves that can mimic that of your favorite biennial.

Though hollyhock grows as a perennial in mild climates, for most gardeners in USDA cold-hardiness zones 2 to 10 it acts as a biennial, self-seeding and flowering the second year. So does garlic mustard. Each of these weed plants produces thousands of seeds that can travel by wind, on animal fur or clothing. Not only do the weed’s rosettes emerge at the same time as the hollyhock’s, they’re dead ringers! Now what?

How to tell hollyhock and garlic mustard apart 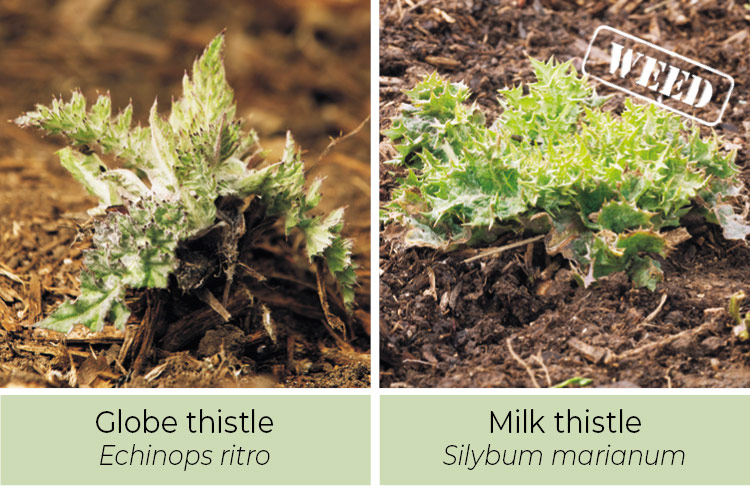 Perhaps you already know your globe thistle grows happily in full sun and lean or poor soil. But a look-alike may be elbowing its way into this same spot!

Globe thistle is cold-hardy in USDA zones 3 to 8. The weed milk thistle, its spitting image, is common throughout North America, and both reseed readily. So how do you know which one’s sprouting in your garden?

How to tell globe thistle and milk thistle apart 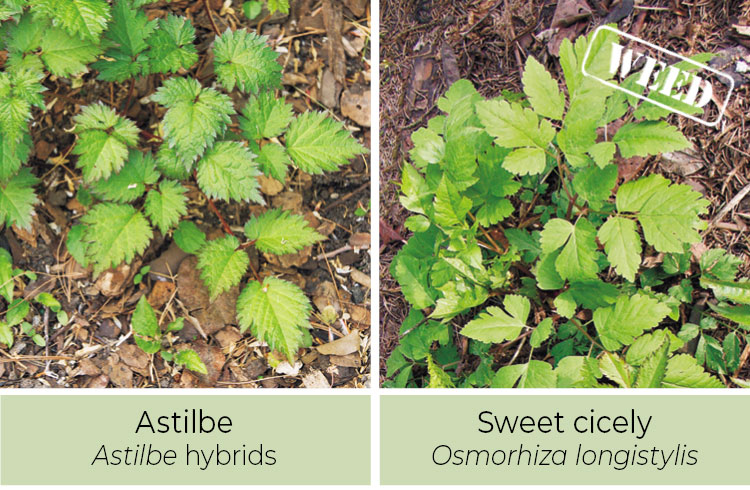 I love my classic shade-loving astilbes. Preferring humus-rich, moist soil and part to full shade, they tolerate sun if I keep them consistently moist. Sweet cicely is a weed that thrives in exactly the same conditions. I had to do a double-take when I found it growing shoulder to shoulder with my astilbes!

Both plants prefer moist areas in USDA cold zones 4 to 8. But you’re more likely to see sweet cicely, which readily spreads by seeds, where winters are cold and snowy. (The seeds need this cold stratification to germinate.) Astilbe doesn’t tend to reseed, so if you see a plant sprouting, it’s probably not your astilbe.

How to tell astilble and sweet cicely apart

Oh look, your perennial bachelor’s button has reseeded itself in a new spot in the garden! Or is that a mullein seed that’s taken root and sprouted?

How to tell bachelor’s button and mullein apart

There you have it. You can step into your garden with your weeding tools and a load of confidence now that identifying weeds from perennials has been demystified.