How to grow potatoes you can harvest from summer to fall 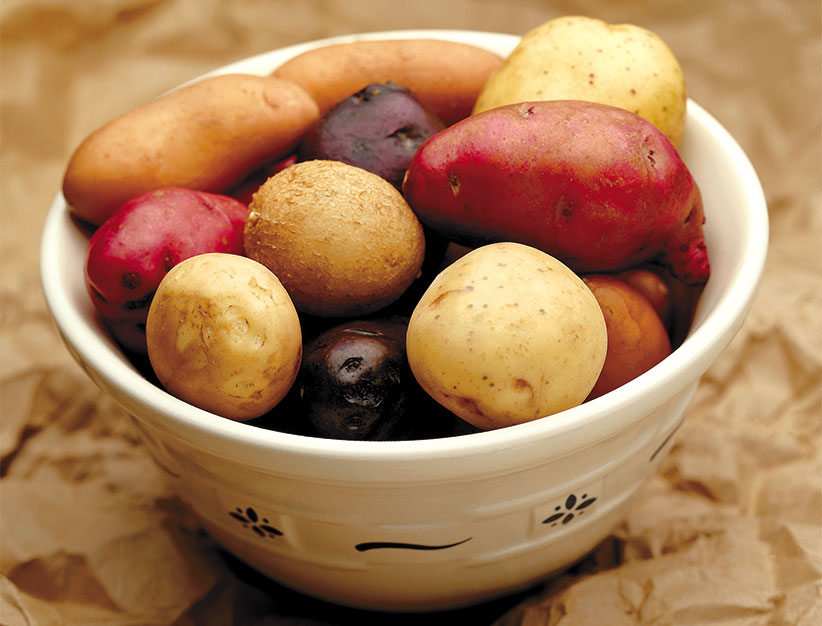 Mounding and hilling are the time-tested ways of growing spuds. But if you’re only going to be growing a few, or if you love “new” summer potatoes, this simple method is worth a try. Step one — Prepare the seed potatoes

Cut the potato into several 1-in. chunks, as in the photo above. Include an “eye” on each piece. This is the growth point where the new plants emerge.

Don’t cut the pieces too big. A smaller chunk of potato encourages the plant to get busy and put down its own, strong roots, rather than live off the stored foods in the seed piece.

And don’t try to get a lot of eyes on a single piece. Each eye will produce several stems. If too many grow together, they’ll compete with each other for sun and nutrients and make a shaggy mess.

Let the pieces chit, or air-dry, for 24 hours. This toughens the outer layer of the potato and helps it resist disease.

You can also give the potato pieces a light dusting of sulfur powder or Bordeaux mixture to help prevent fungi from attacking them. Shake the pieces in a bag with a small amount of the powder until the pieces are evenly coated.

We’ve found that the spuds will be fine without chemical treatments if the soil they’re planted in is dry and warm.

Check with your local extension service for the right time to plant potatoes in your area. With this method, you don’t need to dig trenches or mound soil into hills. Just work a trowel full of compost into a square foot of soil in a sunny, well-drained area of the garden. The soil should be loose enough for the potato to send down roots easily.

Take a piece of seed potato and press it firmly into contact with the soil. Be sure the eye faces up, as in the photo above. Step three — Mound up the mulch

Build up a 6-in.-deep mound of mulch over the potato. Oak leaf mold is excellent for mounding. Straw will also work, but may bring in weeds you’ll have to take care of later.

Water the mound gently to thoroughly wet the mulch. This will help it hold together. Keep the mound evenly moist.

As the vines start to peek through the mound, begin feeding them with a half-strength foliar spray. Use fish-emulsion or seaweed extract once a week until the flowers open, then stop feeding.

Mound additional mulch around the stems each time they’ve grown about 6 more inches.

Potatoes grow at the ends of stolons that the plant puts out wherever the stems are covered with mulch. So in time your plant will have tubers in several sizes within the mound. The best part about this method is that you can “rob” new potatoes, the creamers and steamers, without disturbing the plant. If that’s your goal for your potatoes, the time to go after the first new spuds is right after the flowers bloom, as in the illustration above. Just move the mulch gently out of the way and pop the new potatoes off the ends of the stolons with your fingers.

Only take about 20 percent of the new potatoes at a time. Let the rest remain to keep the plant from being stressed.

Continue watering the plants throughout the season to keep them producing new potatoes.

If you’d prefer to let the potatoes mature and get larger, stop watering them after the flowers bloom. This causes the plant to start concentrating on developing the potatoes. Then, in the fall, when the plant begins to die back, as in the illustration above, move the mulch away and harvest the full-grown potatoes.

Starting a new vegetable garden? Check out our guide before you do!

7 easy plants to start from seed

Cool-season vegetables to plant in fall

Fall is the perfect time to grow cool-season vegetables. Learn which plants do best in fall and this expert’s tips on timing for the best harvest.

The best heirloom tomato varieties to grow in your garden

Check out tomato grower, Jennie Smith’s, favorite heirloom tomatoes varieties ranging from cherry to beefsteak and learn a little about each one’s history.

Ideas for growing herbs in pots

No space for an herb garden? Grow herbs in a container garden instead! These herbs in pots are perfect for growing outdoors on your deck, patio or in windowboxes.