How to Keep Moles Away 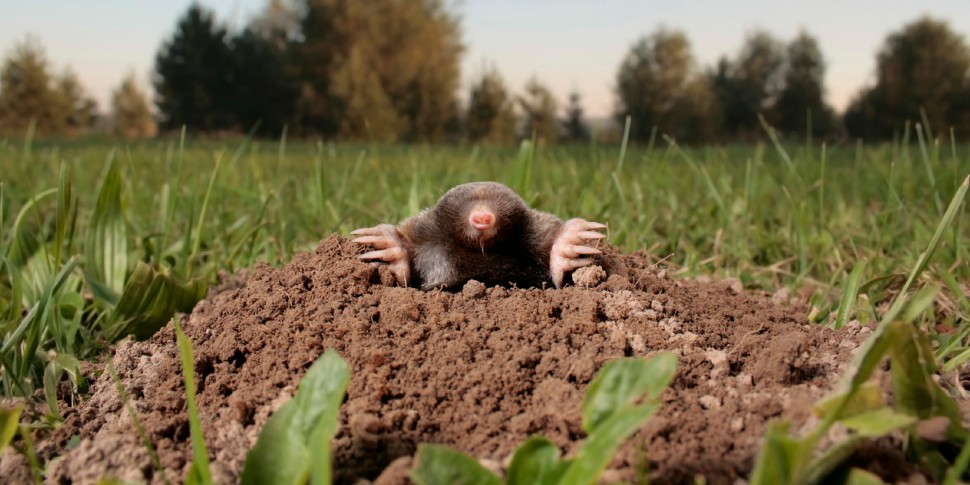 Moles can help keep the insect and earthworm population of your garden down, but their presence is not without some unwanted nuisances. While Moles will not intentionally damage or eat any of your plants, their burrowing habits can leave your lawn, flower beds, and plant roots in moderate to severe disorder.

It is also very rare to actually catch the burrowers in their misdeeds as most of this is done underground and often at night. It is more likely that you will awaken to see tunnels work crisscrossing your lawn, large molehills rising in one corner, and plants and flower beds will also be visibly upset.
For people with a special love for the perfection and beauty of their garden and lawn, a mole presence can be especially distressing. Many times the immediate reaction is to seek out effective ways of killing the intruders, but this is not always the most effective solution.

In the following article, we will take a closer look at the mole menace and some of the most effective ways of being rid of moles in the garden.

While this is a potentially costly investment, especially for dealing with a larger area. Underground fences are one of the best ways to keep moles from entering a protected area. To effectively keep out a mole, the fences must run 24 inches into the ground and extend 6 inches above the ground. This will keep the moles from climbing over or tunneling underneath.

Some preferred materials for this project will be galvanized wire mesh that avoids corrosion. Don’t use regular chicken wiring because many smaller moles can squeeze through the gaps.

Another way to perform the same trick is by digging a foot deep moat around your lawn flower beds, or specific areas you don’t want moles in. A mole’s soft claws are not powerful enough to move gravel and this is an effective deterrent.

Preventative measures are always the most effective at keep moles from entering your gardens. The biggest reason that moles will come poking around is to find food and comfortable living space. By removing these incentives, the vast majority of moles will be happier in their natural surroundings.

Moles like to eat insects and worms, by keeping your garden free of these food products, you can avoid a mole invasion. Look to keep insect and worm populations low using natural or synthetic insecticides. Earthworm populations can be controlled with the use of nematodes that carry bacteria that can be fatal to worms.

If you water your garden often, the chances of having abundant insect and worm populations increases. Drier tougher grasses will not have as great a problem with moles. Furthermore, making sure that just enough water is given to the grass, ensures there is nothing left over to fuel an infusion of insect life.

Moles are very shy creatures and will not often intrude on a garden where there is a lot of action, this is why they like to act at night. Even a garden that is frequented by children at play, is not a popular hangout for a mole.

One good way to keep moles away is with the presence of a dog or cat. Because these animals urinate and mark their territory in other ways, moles will stay away from the premises. If you get a dog breed or husky cat with sharp hunter instincts, it is likely to hunt down the mole and kill it. This may or may not include a few more whole around the yards, however.

Moles have a very strong sense of smell they use to explore their environment. One they really don’t like is strong smells which impeded their capacity to navigate and find food. Planting especially smelly plants are one way to keep their destruction at bay.

Garlic plants have attractive flowers and a potent fragrance that can keep moles away. If you are a coffee drinker, rejoice! All those coffee grinds you produce each day are the perfect aromatic deterrent. Just clean out the coffee maker and dump the grins at choices places around the yard, this not only keeps moles away but helps to nourish the soil.

This is a trick as old as glass bottles themselves. Place an empty glass bottle into the ground up to its neck with about an inch and a half sticking up out of the ground. In this position, the passing wind will begin softly piping on the hollow glass. Moles will hear this sound and begin packing up for a relocation because they are nervous folk and don’t like rackets.

If you have tried all the aforementioned methods and the mole menace has not dispersed, you may need to take more drastic measures. Because, moles will rarely burrow more than a couple of feet into the ground, attacking the mound and tunnels with a sharp pitchfork or shovel has been found effective. Sometimes the destruction of its mounds will discourage further activities in your yard.