Whether it’s in your front or backyard, gardens can be a great place to hang flags. The flags could be about anything — celebrating your country of origin, the state you live in, or just a flag to welcome in a new season. You could even use the stands to hang flags that mark your plants, making your own garden into a detailed nature walk.  Whatever the reason, flags look great in gardens, but to fly one you’ll need something that can actually keep the flags in place.

Thankfully, there’s a product for everything! You can keep your gardens decorated with some of the premier garden flag stands of 2022. They won’t look out of place in your yard and they’ll stay firmly in position no matter how rough the weather gets. Take a look at our guide to these nifty garden flag stands to find the right one for you. 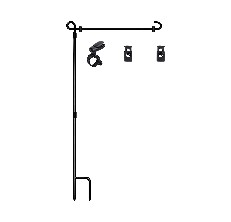 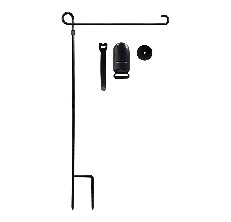 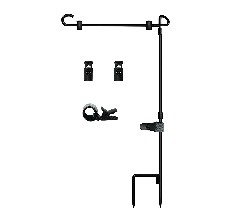 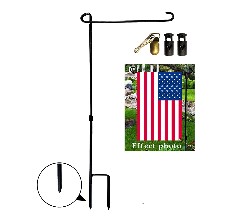 A Buyer's Guide to the Leading Garden Flag Stands

Gardens are a great place for decorations, including flags. This guide will cover everything you need to know about choosing and purchasing a garden flag stand for your garden or patio.

What Is a Garden Flag Stand?

A garden flag stand is a type of yard ornament that can hold and display small flags on your lawn. Keep in mind that garden flag stands are not the same as flagpoles; they can’t raise or lower flags. Instead, the flag is clipped and hung onto a metal post that is inserted into the ground to help the flag stay in place.

Garden flags can be used to display all sorts of flags. From country flags to state flags to seasonal flags, you can show off just about anything with these small, expressive flags. Most people love to welcome in the new season with a themed garden flag.

What Are the Parts of a Garden Flag Stand?

Garden flag stands have three main parts: the metal stand or base, the stoppers, and the clip. Below, we’ll go over each of these pieces in detail and explain how they each function.

The base, typically made of metal, is what holds the flag in place above the lawn. At the bottom of the metal base, you have two sharpened metal rods. The rods are used to drive the stand into the ground. This is a simple, quick process and doesn’t require any tools. Two rods are used instead of one to make sure that the flag doesn’t tilt towards one side and that the flag stays squarely on the pole and can be easily read.

The stoppers are the parts of the flag stand that keep the flag in place. Because most flag stands hang from the top, if you’re showing a country flag, it will be displayed vertically rather than horizontally. The stoppers ensure that the flag doesn’t move from its position, which is useful for keeping the flag from moving around and folding in the wind.

Not all garden flag stands have stoppers. Some may have two stoppers, others may have one and some might not have any stoppers. It all depends on the design of the flag stand.

While stoppers hold the flag in place at the top, the clip is what prevents the flag from flying and flapping around in the wind. A single clip holds the flag about halfway down the length of the flag. The clip isn’t there to keep the flag from falling off, but rather to prevent it from moving around needlessly. You can’t really display your flag if you can’t see what the flag shows; the clip can help keep the flag in place so the message or text can easily be read.

Due to how the flag is positioned, there is one spot where the flag can still flap about in the wind. This isn’t something you can do much about, and it’s actually a good thing that the flag flaps to a degree. If the flag didn’t flap, the flag would catch all that energy from the wind, which could easily uproot the stand if the wind is strong enough. With at least one side flapping, the wind has a place to go. While it may look silly, at least the flag stand will stay in place.

Here Is the Best Garden Flag Stand of 2022

With a clip and spring stoppers to hold the flag in place, the HOOSUN Garden Flag Stand is one of the easiest garden flag stands to work with. The design has the flag run down vertically with the long end running across the length of the pole. Using the spring stoppers you can set the boundaries of the flag on the top. The tiger clip keeps the flag from flailing about in the wind or rain. While the flag can still move around a little bit, you can rest assured it will stay put. We’ve chosen this garden flag stand as our best overall choice thanks to its simple and quick installation and setup.

Velcro is a very reliable material and this next flag stand by YAEHOME uses velcro in a clever way. The velcro strap connects to a clip that holds the flag in place from the side. Since it uses velcro, the clip stays in place quite reliably, keeping the flag in position even during rough weather. The rest of the flag stand is quite standard. It includes a stopper to hold the flag in place on one end and a high-quality wrought metal stand, which is lightweight and easy to install. The lack of a second stopper does mean that the flag may move a bit in the wind, but it’s not too significant.

Garden flag stands to need to be durable enough to hold flags for weeks, months, and even years at a time. Featuring a thick metal flagpole, this garden flag stand-by Akeydeco is made for long-term use. Made out of high-quality, rust-proof metal, this flagpole will stay in like-new condition even with daily use. This garden flag stand accommodates most standard-size flags — any flag that’s 14 inches wide or less will fit. As an added bonus, you can get a full refund in 30 days if you’re not happy with this garden flag stand for any reason.

One of the problems with putting metal outside in the yard is that it can easily rust over time. The weather can change at a moment’s notice and these changes can make most materials degrade over the course of several seasons. But the VIEKEY Garden Flag Stand features a rust-proof coating, which makes the stand resistant to moisture and wet weather conditions. You can put this flag up rain or shine and it will still look as good as new. Customer service is also available in case you have a problem with your order.

Sometimes, having one flag just isn’t enough. Nirohee sells garden flag stands in sets of one or two if you want more than just a single flag in your garden. Both stands are made of the same durable metal and include three distinct parts: a metal flagpole, a tiger clip, and a spring stopper. Thanks to their incredibly simple design, you can set up both stands in a matter of minutes. Using the included tiger clips and spring stoppers, you can position and adjust this garden flag stand to your liking, giving it a perfect fit in your back or front yard.

Q: Are garden flag stands easy to set up?

A: Garden flag stands don’t require any tools to set up. Simply insert the metal base into the ground, attach your flag, and you’re good to go. You can assemble them in a matter of minutes!

Q: What should I put on my garden flag stand?

A: You can put any flag that you like on your stand. We recommend a flag that shows off your favorite country, a quote that inspires you, or a seasonal greeting.

A: Garden flag stands are rust-resistant and weather-resistant, so they can last quite a long time if taken care of. In rough weather or storms, we recommend bringing your garden flag stand indoors. 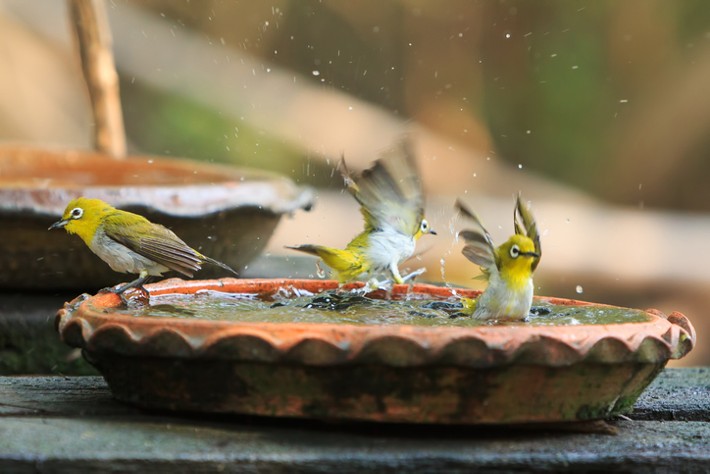 Wake Up to the Sound of Nature With the Best Bird Bath Bowl
Whether you have a beautiful garden filled with flowers or a homely balcony with some plants, birds are always a welcome guest. Summer can be challenging for birds as the… 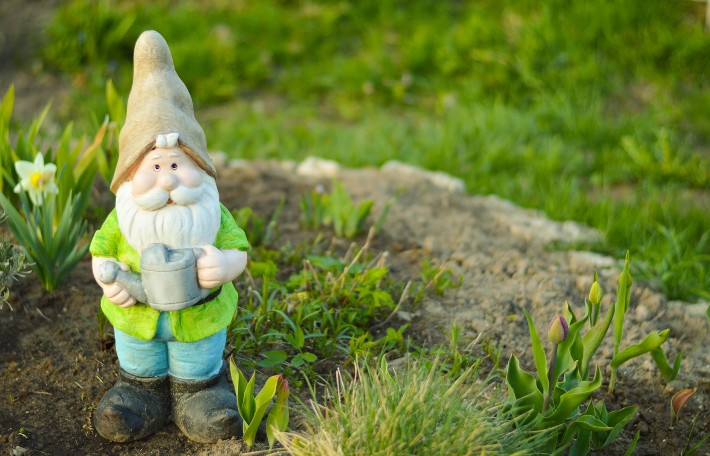 Add a Touch of Whimsical Charm to Your Garden With the Best Garden Gnome Statue
The home gardens are no less than a personal retreat in a mentally taxing and physically consuming world. Whether you plan to use your garden as a makeshift reading nook…

Decorate Your House With Best Wreath Frames
Want to make flowers the permanent part of your property? For this, you need the top wreath frames in 2022. They are widely used for Christmas or regular flower decoration…