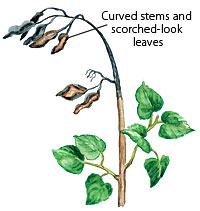 IDENTIFICATION — This aptly named infectious disease makes a tree look scorched, with leaves and stems withered to brown or black. Many stems curl over in a distinctive “shepherd’s crook.” And infected leaves stay on a tree long after healthy leaves have fallen off in autumn. A sure sign of fire blight: Diseased wood under the bark is wet and rust-colored.

When it moves into larger limbs, fire blight forms dark sunken cankers, which ooze a creamy to amber-colored liquid filled with millions of bacteria. The bacteria overwinter in the cankers and spread quickly as temperatures rise and rainfall increases in spring.

DAMAGE — Fire blight, caused by the bacterium Erwinia amylovora, is extremely infectious. It affects more than 75 species, including pears, apples, hawthorns and roses. The disease is spread by insects, birds, wind, rain and humans. Bacteria enter through any opening, from blooming flowers to the smallest of cuts. It moves quickly, searing portions of a plant within weeks. And cankers in main limbs can girdle and eventually kill a plant

When the weather is dry in spring, you can spray plants with streptomycin (Agri-mycin®) or other bactericides to help prevent infection. Apply copper compounds (like lime sulfur) during the plant’s dormant period.

As soon as you see the symptoms, prune the diseased areas off the plant. Cut 10 to 15 in. below the base of infection. Make sure you disinfect your pruners after each cut, using a 10 percent chlorine bleach solution (1 part bleach to 9 parts water). Burn or bury infected branches and leaves when you’re done. If the damage has spread to the trunk or main stems, it might just be easier (and cheaper) to remove the infected plant and replace it with a more resistant cultivar.

Because it really stands out, even at a distance, it can be hard to incorporate into the garden.

Cochineal scale are small (up to 1/4-in.) crimson insects that attack Opuntia, such as prickly pear and cholla cactus.