Winter burn causes an evergreen’s foliage to die off. The most common cause is desiccation. 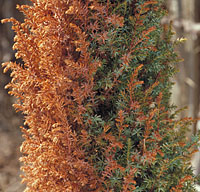 Winter burn causes an evergreen’s foliage to die off. The most common cause is desiccation. See how the exposed half of the juniper at right is brown while the side protected by the fence is just fine? This is a classic example of winter burn. If the shrub is in a windy or exposed area, such as the southwest side of a building, sun and wind draw the moisture out of the foliage. Because the soil is still frozen, the plant’s roots can’t take in replacement moisture, and the dried-out cells die. Once it’s brown, evergreen foliage won’t come back. So in spring, when the branches start to warm up and become supple, prune brown areas back to the first green shoots. New growth will eventually fill in the bare areas, but you may want to replace unsightly evergreens that have been badly burned. 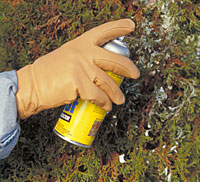 To keep moisture in the plant, apply an antidesiccant spray, such as Wilt-Pruf®. These sprays contain natural, waxy resins that seal leaves and needles and prevent water loss without damaging the foliage. Apply antidesiccants to an evergreen’s most vulnerable sides after the ground freezes. For especially tender plants, such as arborvitae, hemlock and yew, spray all the foliage. Broadleaf evergreens, such as rhododendron and holly, should also have all of their leaves coated, top and bottom. Spray when the temperature won’t drop below freezing for 24 hours. One coating lasts about two months in winter sun and cold, then needs to be reapplied for maximum protection.

The classic red poinsettia is ever-present come December, and you can buy it as easily in the supermarket as the floral shop.

There is such a thing as too much of a good thing — fertilizer, for example. In house plants, too much fertilizer can cause the leaf tips to turn yellow and eventually brown.