These poorly understood landscape pests are difficult to control. You may never see a mole, but they leave an obvious trail of evidence. 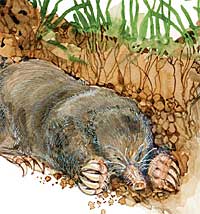 IDENTIFICATION — These poorly understood landscape pests are difficult to control. You may never see a mole, but they leave an obvious trail of evidence. Moles tunnel underground, eating soil-dwelling insects and earthworms — rarely do they eat plants. As their prey gets closer to the surface, so do the moles.

DAMAGE — Mole tunnels are a major nuisance in the lawn where mower blades cut unevenly and scalp the grass. If you have moles, stomp down the tunnel tracks before you mow. Regularly stomping the tunnels will discourage mole activity, but it won’t get rid of them for good.

CONTROL — Controlling moles is difficult because their activity is erratic. There are many poisons, repellents and noisemakers that are marketed to control moles, but many of them don’t really work. Trapping and killing moles is the most effective method of control. You can purchase traps at the garden center or call a professional pest control company to take care of them. Either way, keep kids and pets away from the traps because they can cause serious injury if they’re tripped accidentally.

This broadleaved annual creeps low to the ground, growing roots at nodes that touch the soil.