“Who’s been eating my asparagus?” The answer is probably Crioceris asparagi, better known as the common asparagus beetle, the colorful, 1/4-inch-long insect in the photo above. The small, blue-black beetles with cream-colored spots show up in your garden early in … Continue reading → 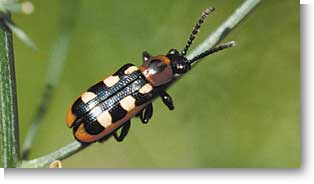 “Who’s been eating my asparagus?” The answer is probably Crioceris asparagi, better known as the common asparagus beetle, the colorful, 1/4-inch-long insect in the photo above.

The small, blue-black beetles with cream-colored spots show up in your garden early in the spring, just as you’re looking forward to your first asparagus harvest. They feed on the spears, causing them to develop crookedly. Besides feeding damage, the beetles lay eggs on the spears. You may notice the rows of little dark eggs on the spears or on the foliage, like the ones at right. The eggs won’t actually hurt the plant, but they’re not very appetizing. In a small asparagus bed, you can wipe off the eggs from individual spears, cutting down on the number of beetles who make it to the adult stage. The eggs hatch in about a week.

When the eggs hatch, the larvae emerge. The larvae, shown here, eat the ferny asparagus foliage, and if there are enough of them, can defoliate the asparagus, weakening the plants and making them more susceptible to disease. The larvae feed for about two weeks, and then they fall to the ground and pupate in the soil. You’re not likely to notice the pupae in your garden.

After pupating for about a week, the adult beetle emerges, and starts a whole new generation of insects. The adults feed on the asparagus foliage, too, and remain active all during the growing season. Usually there are two generations of asparagus beetles a year, although this can vary in different climates.

The good news is that most gardeners will never have enough common asparagus beetles in their asparagus bed to do serious damage. A few beetles won’t really hurt anything. However, it’s a good idea to get rid of them when you do see them, before they have a population explosion!

The easiest way to get rid of a few beetles is to pick the adults and larvae off the plants and drop them in a pail of soapy water, where they’ll drown. Adult beetles overwinter in leaf and plant litter, so another important step is to clean the bed up in the fall, burning or composting the dead foliage.

You may also notice some tiny, metallic-green wasps (less than 1/8 inch ong) around your asparagus patch. You’re probably seeing Tetrastichus asparagi, a natural insect enemy of the asparagus beetle. Leave these little guys alone, because they’re on your side.

If all else fails, products containing the botanical insecticide pyrethrin, or the chemical insecticide carbaryl (Sevin) are effective against asparagus beetles. Some formulations are safe to use up until the day before harvest, but you’ll need to check the label to make sure. Once you’ve finished harvesting for the year, it’s OK to apply pesticides to the foliage, but be careful around your other vegetable plants.

When should you worry about asparagus beetles? A rule of thumb is that if you spot an adult beetle on 1 in 10 plants or larvae on 50 to 75 percent of the plants, you should use some kind of control. However, in a small asparagus patch, those numbers might still mean only a few beetles, which are easily handpicked from the plants. 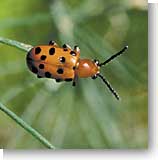 Another visitor to your asparagus might be the spotted asparagus beetle (Crioceris duodecimpunctata), shown at left, and about 1/4-inch long in real life. Spotted asparagus beetles do lay eggs on asparagus, and the adults and larvae do feed on asparagus (often on the berries), but they do less damage than the common asparagus beetle, although the life cycles are the same. They show up in your garden a little later in the spring, so the adults don’t have much opportunity to feed on the spears, and they only lay eggs on the foliage. The larvae feed mostly on the berries instead of the foliage, and that doesn’t affect the plant’s health.

Enter for your chance to win a copy of Ellen Zachos’ book: The Forager’s Pantry

Here's the list of cold-hardy roses that grow without protection at the Greater Des Moines Botanical Garden.

Enter for your chance to win a fertilizer prize package from Neptune's Harvest this May!