Sometimes your pepper harvest is just too good to share, even if you know you should.

If there is one thing I can grow, it's peppers.

I don’t know what it is about the raised beds in my urban backyard, but I tell you what — I can grow peppers. It could be that peppers are relatively easy veggies to grow and I’m not the amazing gardener I pretend to be, but maybe just let me have this one delusion.

The fact I can grow peppers like a boss is a good thing because my husband loves peppers. Like really, really loves them. In fact, one garden bed is dedicated almost exclusively to peppers; sweet peppers, peppers that melt your face off, and everything in between. He eats them on anything, freezes them by the gallon bag all summer, and then makes spicy pickled peppers with the leftovers to enjoy all winter. And when I say this man eats them on anything, I mean on everything. I’ve watched him chop up jalapenos for his scrambled eggs for breakfast and put habaneros on every soup, sandwich and salad. It’s inappropriate, really.

Although he is generous in every other aspect of his life, the thought of sharing his peppers gives him the sweats. In fact, last summer I was in the garden, my favorite blue bowl on my hip, plucking pepper after pepper from the overflowing plants. We’d had a stretch of perfectly warm summer weather, so each of our 10-ish plants had easily 30 peppers dangling from it.

Just then, my neighbor rolled down his driveway after finishing a bike ride. He laughed at my overflowing bowl of peppers and mentioned casually that his own peppers hadn’t been doing as well. I grabbed two handfuls of peppers from my bowl and happily handed them over the fence. 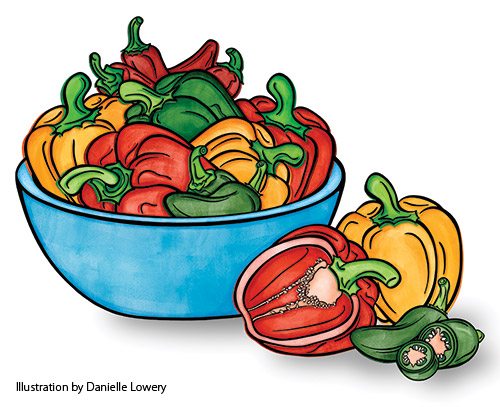 “Take some of ours,” I said. “We have plenty!” The second I handed the peppers over the fence, I could feel my husband’s eyeballs on me. As my neighbor thanked me and headed inside, my husband stuck his head out the back door.

“Did you just give away some of my peppers?” he hissed loudly.
As I crossed the yard, dropping peppers as I went because the bowl was so full, I rolled my eyes.

“But what if I run out and there aren’t enough to make pickled peppers? What if the plants all die off this week? What if the neighbor doesn’t eat them and lets them go to waste? How many do you think you gave him?”

Friends, I’ve seen my husband cry a total of five times in our 20+ years together: when each of our four children was born and the day we dropped our oldest off at college four states away. I believed I was about to witness his tears again because I gave his peppers away so carelessly.

Alas, more peppers did grow. So many, in fact, we had yet another freezerful of hot peppers and yes, even plenty for pickling. But my husband is still keeping a close eye on this year’s harvest. Some things never change.

When Jamie isn’t growing plenty of the hottest peppers in all the land for her husband while sneaking some to the neighbors, she’s probably working her way through the Sunday crossword and only cheating when it’s absolutely necessary.

The Dog Days of Summer

The Tale of Two Lima Beans

Did I Plant That?

Stephanie Rose of Garden Therapy specializes in using her herb garden to create natural housekeeping products. She shares 3 ideas with us here!

Jamie's husband isn't ready to share, his apples, no matter how cute the "borrower" is.