How to Grow Radishes

Learn the secrets to growing radishes and how to harvest this cool-season vegetable in both spring and fall! 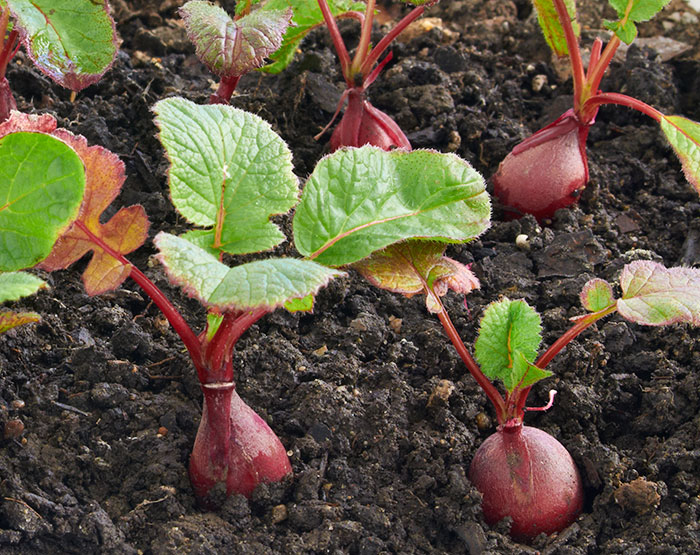 Did you know you can grow radishes in spring or fall?

I used to think that radishes were the perfect early spring vegetable. Then I learned that you can also grow them in fall and have been growing them for several months a year ever since. Because they’re so fast growing (seedlings typically emerge 3 to 7 days after you plant), they’re great candidates for succession planting, and you can get several harvests in a single growing season. Plant them between other crops, in containers, or anywhere you can find an empty space. Radishes are typically grown for their spicy and peppery taproot.

There’s so much variety: Radishes come in all kinds of shapes, from the traditional globes to medium oblong shapes and longer daikon types. And you can find every color in the rainbow but blue, even black and white. Little-known fact: The entire radish plant is edible!

Although you can plant the same seeds you traditionally grow in spring for a quick fall crop, there is also an entire group considered “fall radishes.” Because temperatures get too warm before they mature, they aren’t good candidates for spring sowing, but they are very cold tolerant, and you can harvest these little nuggets until the ground freezes every year. Scroll down to learn about the key differences between the two types and meet some varieties I think you should try in the gallery at the bottom of the article. Read on to learn how to grow them in both spring and fall!

Where to buy radish seeds 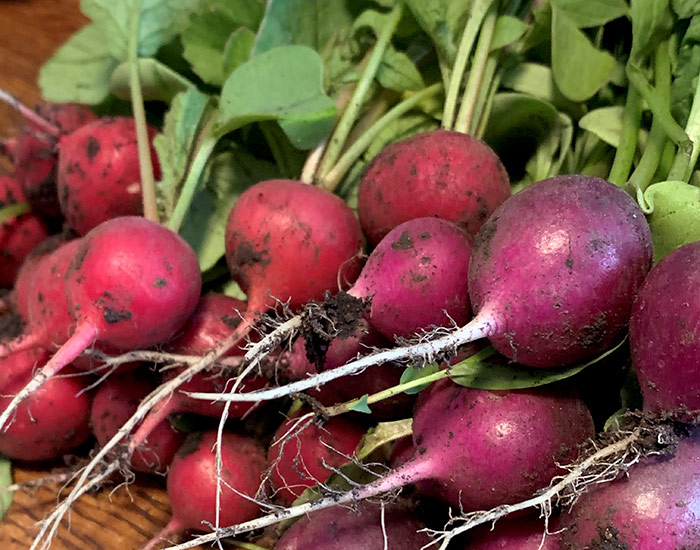 How to grow the best radishes

How to plant radishes

The planting method is the same for all radish types:

All radishes are tolerant of frost. In fact, fall varieties can survive temps as low as 20 degrees F. However, to keep the soil from freezing (so you can continue to harvest), throw down a 4-inch layer of straw for mulch as soon as you’re expecting temperatures below 28 degrees F.

Straw mulch is also a good idea in spring. It’ll help keep the soil between 60 and 70 degrees F to prevent bolting, or early flowering, which negatively impacts radish shape and flavor. 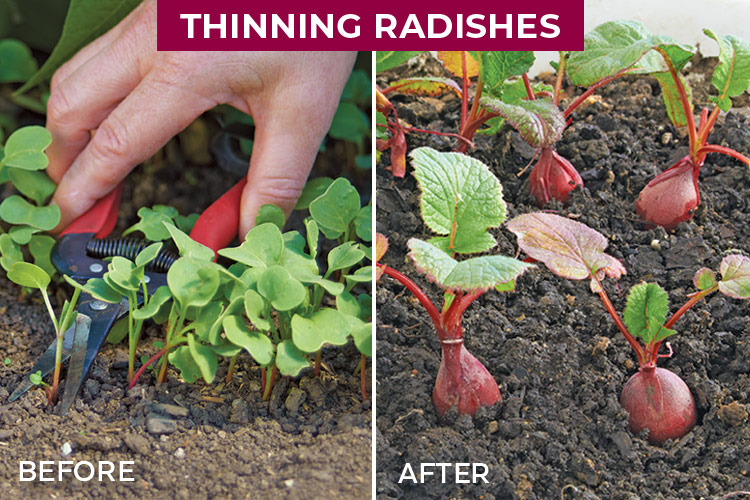 “Thinning” is undoubtedly the most important step of growing radishes. Once the seedlings are 2 inches tall or about a week old, thin them to about 3 inches apart. To thin, snip the greens at the soil line. The photos above show how sparse your thinned row may look at first, but you need to do it to give those roots a chance to fill out. Don’t waste those tops, though: Wash the microgreens up and put them in a salad!

It can be tricky to tell if your radishes are ready to harvest: If pulled to early, they could be too small for eating; and if left too long, they become woody and tough.

I use two methods when deciding if my radishes are ready to harvest. First, I scrape away the soil from the top of the root using my fingers or a small trowel. Roots of mature radishes are roughly 1 inch in length, depending on the variety (again, refer to seed packet). If the roots are still too small, I recover them with soil and let them continue to grow.

But sometimes I just use the “go for it” method: I pull a couple out and spot check. If the root is large enough to eat and still firm to the touch, it is time to harvest. Spring radishes mature quickly, so I check mine every few days. You won’t need to do this as often for fall types since they store well in the ground past maturity, but you should pull them before the ground freezes.

What's wrong with my radishes?

Unfortunately, not every radish comes out of the ground as perfect as these. Here are a few problems you might encounter and what causes them.

You Might Also Like:
Companion Plantings for Vegetable Gardens
Growing Vegetables Indoors
How to Build a Keyhole Garden Bed

Once the radishes leave the ground, cut off the greens, wash the roots and store them in the refrigerator. Storage time depends on the variety of radish you decided to grow. When you cut the tops from your radishes, don’t toss them. Instead, add them to salads, soups, sauces or sautés. They’ll store well for a few days in the refrigerator: Just wash, pat them dry and place them in a resealable plastic bag. 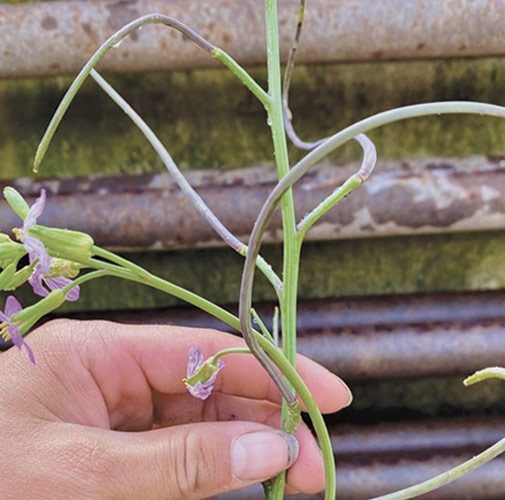 Radish seed pods are not only edible, but you might be surprised at how delicious they are! You’ll need to let the plant bolt, or flower, for seed pods to form. They are slightly spicy but milder than the root. Harvest radish seed pods when they are young and bright green, or they turn bitter and woody. Just rinse and pat them dry before storing for up to a week in the refrigerator. Eat them raw, in salads or sauteed in a stir fry. I personally love to pickle them!

There are a few differences between spring and fall radishes, we've compared the two below:

There are a wide range of radishes you can grow in spring and fall. Check out the gallery below that includes both spring and fall radishes, each type is noted for when it is best grown.

Jamie doesn't throw away her Christmas tree anymore. She invites birds into its branches.