At 8 to 20 in. tall, narrowleaf hawksbeard looks like a dandelion on steroids. In fact, this edible annual’s leaves can be used just like a dandelion’s, as a green in salads. 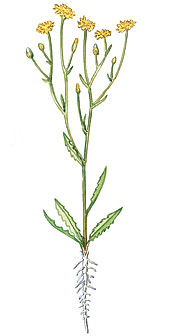 IDENTIFICATION — At 8 to 20 in. tall, narrowleaf hawksbeard looks like a dandelion on steroids. In fact, this edible annual’s leaves can be used just like a dandelion’s, as a green in salads. Plants grow upright, branching stems from a long, thin taproot. The toothed edged leaves get narrower and smoother near the top of the stems. A single, daisylike yellow flower forms at the end of each branch.

FAVORITE CONDITIONS — Hawksbeard was introduced from Europe and isn’t picky about where it lives. Sandy, loam or clay soils are all fine. And it grows in full sun to part shade. It’s found in tilled, moist soils, like vegetable gardens, throughout Canada and the northern tier states, the Midwest and on both coasts from Washington to Southern California and Maine to South Carolina. It seems to avoid the desert Southwest and Deep South.

CONTROL — These plants reproduce by seed. Although they can appear most any time during the growing season, the main flush emerges from mid-May to mid-June and from early August to mid-September. They flower in July and August and set seed through the fall. Preventing the seeds from setting and being dispersed is the best long-term control.

Although this isn’t a major turf weed, if you do find it in your lawn, mow back the plant before it flowers. Or use a postemergent, broadleaf herbicide that contains 2,4-D, like Trimec®, mid-April through early June and September and October, when the weed is actively growing. Avoid using 2,4-D in July and August. In high heat and dry conditions, it could damage or discolor a lawn. Remember, broadleaf herbicides can injure or kill vegetables, flowers and ornamentals, as well as weeds. So don’t let herbicide sprays or granules come into contact with them in the garden. Instead, hoe out sprouting hawksbeard seedlings. For more mature plants, dig down at least 3 in., loosen the soil around the taproot and try to pull the weed out whole.