Adult fungus gnats are generally considered a nuisance. But the larvae, in large enough numbers, can be a real problem. 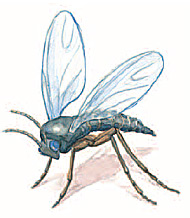 IDENTIFICATION — If you’ve noticed tiny flies that take flight from your house plants when you water, they may be fungus gnats. Fungus gnats are actually small dark gray flies about 1/8 in. long. They thrive with plenty of moisture and decaying plant matter. Most of their lives are spent as larvae feeding below the soil surface on organic debris and plant roots. After pupating, females can lay up to 300 eggs.

DAMAGE — Adult fungus gnats are generally considered a nuisance. But the larvae, in large enough numbers, can be a real problem. They feed on root hairs and small feeder roots, which causes stunted growth, off-color leaves or, in cases of severe infestation, leaf drop.

CONTROL — There are several simple ways to prevent fungus gnats from taking over. Avoid overwatering, use a sterile potting mix to keep from passing larvae along and remove plant debris from the soil surface.

If you do see these winged visitors hovering around your plants, cut a small cube of raw potato and push it into the soil of each plant to attract the larvae. Remove the potato piece after a few days and discard in the trash. Add another potato cube if you still see gnats around.

For severe infestations, try Gnatrol®. It’s a special strain of Bt bacteria (Bacillus thuringiensis), which is safe for home use. Ask for it at your local garden center.