How to Grow Dahlias

Thinking about adding these beautiful blooms to your garden next year? Find out how to grow dahlias with tips from the experts at Swan Island Dahlias. 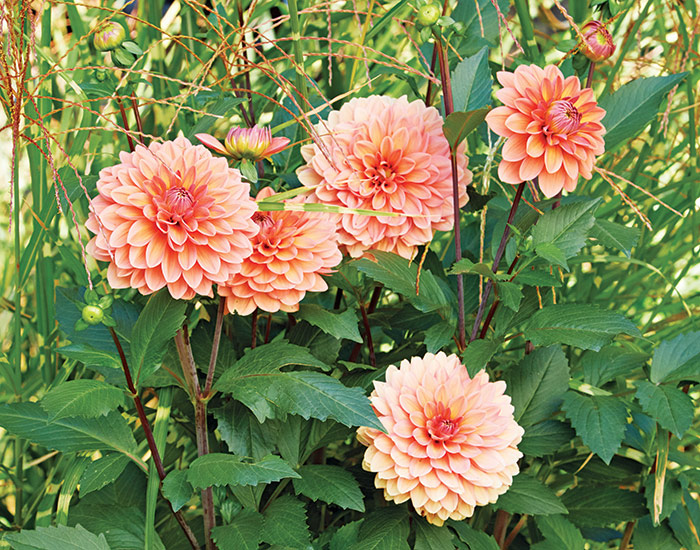 Grow dahlias with this expert advice

Who would guess that a few plain-looking tubers could grow into such beautiful flowers? Dahlias bloom in a myriad of colors, patterns, shapes and sizes that will brighten your borders from midsummer to frost. And they're an excellent cut flower! Nicholas Gitts is a second-generation owner of Swan Island Dahlias, a mail-order dahlia nursery in Oregon, and has been growing these fabulous flowers for most of his life. We've asked his expert advice on how to successfully plant, grow, dig, and store dahlias.

Full sun, at least 8 hours a day, and well-drained soil is the best way to grow beautiful dahlias. In general, the larger-flowered dinnerplate types have fewer flowers on taller plants. Smaller varieties usually have more branching and smaller blooms. If you only have part sun, try some smaller cultivars. They don’t seem to mind a little less sun (no less than 6 hours) as much as the bigger ones do.

Tips for growing dahlias in the heat

Dahlias grow easily pretty much everywhere but can struggle where temperatures get more than 100 degrees F consistently. But if you’d still like to grow them, there are a few tips that can help in hot summer regions:

There’s no need to fertilize a lot or use compost with dahlias. Most are usually too rich or too high in nitrogen, which produces weak stems and can burn the tuber's "eyes" (the small growth bud near the stem) at planting time. Instead, use a plant food low in nitrogen and high in potassium and phosphorus. Apply it 30 days after planting then again 3 to 4 weeks later.

Which tubers are best?

When you buy dahlia tubers, you might notice a difference in what you get. Those from mail-order nurseries tend to be single division tubers that look kind of like a small potato, often with the cultivar name stamped on the side.

The bags from big box stores frequently have a clump of several tubers joined together at the old stem. You might think that a clump would grow a bigger plant, but that’s not so. In fact, it’s best to divide them before planting — you’ll get sturdier, healthier plants this way. 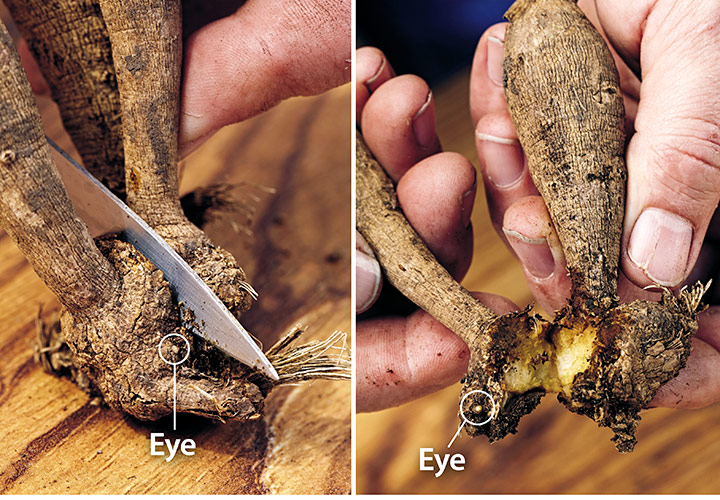 To divide a clump of dahlias, slip a sharp knife in between the tubers. As you’re cutting, twist the knife a little and the tubers will snap apart. Make sure each tuber has at least one eye, or growth bud.

It can take a couple of weeks to see growth from your dahlia tuber and 8 weeks or so for it start blooming. To ensure you have plenty of blooms to enjoy after that long wait pinch or snip out the growth tip when the plants have three sets of leaves. 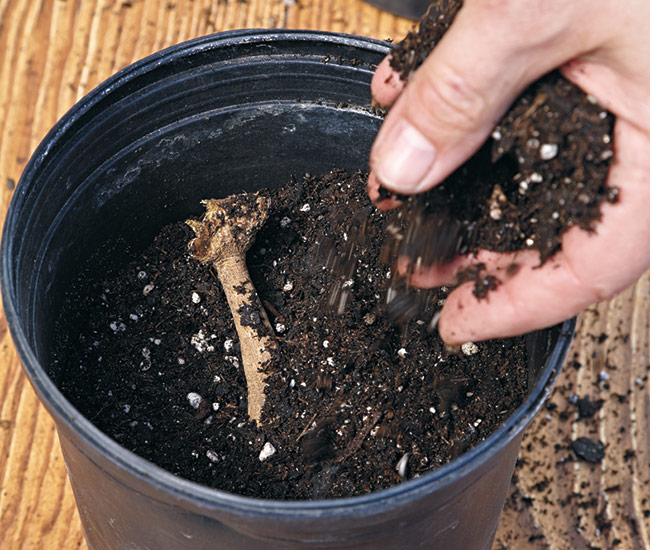 For earlier blooms, Nicholas suggests starting dahlias in pots indoors about 6 weeks before the last average frost date in your area. 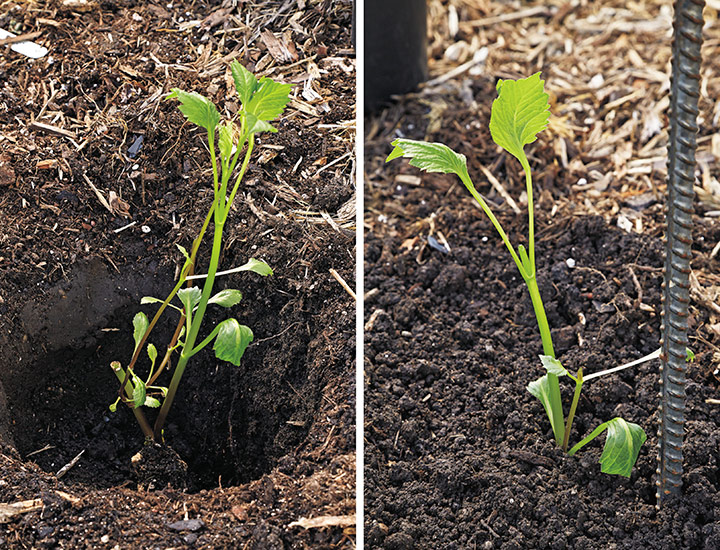 Just like with the tubers, the potted dahlias can go outside when the soil temperature is at least 60 degrees F. Dahlias are quite frost sensitive. To plant them in the ground, dig a hole as deep as the pot and set the plant in the hole so the potting mix is flush or slightly below the soil line. Cut the stems back to just above a leaf node about 6 inches above soil level to encourage branching.

How to stake dahlias

Dahlias have hollow stems that can snap off easily in a strong wind. So if the cultivar your growing is more than 3 feet tall, Nicholas suggesting giving it some type of support. The best time to put in a stake is at planting time. That way, you won’t damage the tuber, roots or stems later. 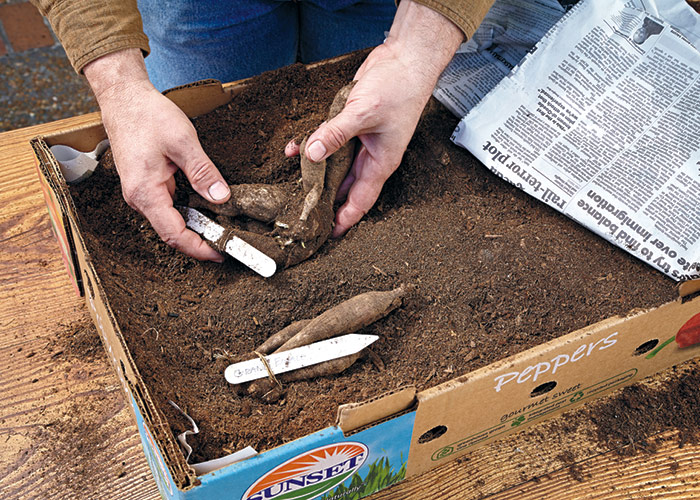 Save dahlia tubers to grow again next season

Dahlias are only cold-hardy in USDA zones 8 to 11, so in most areas you’ll need to dig the tubers out of the ground after a frost kills the foliage in fall. Cut the stem off to 6 inches above the soil before digging to make handling easier. See our article on How to Save Tender Bulbs has lots of helpful tips for getting your tubers through winter so you can enjoy those gorgeous blooms again next year.

Pin this growing guide for later! 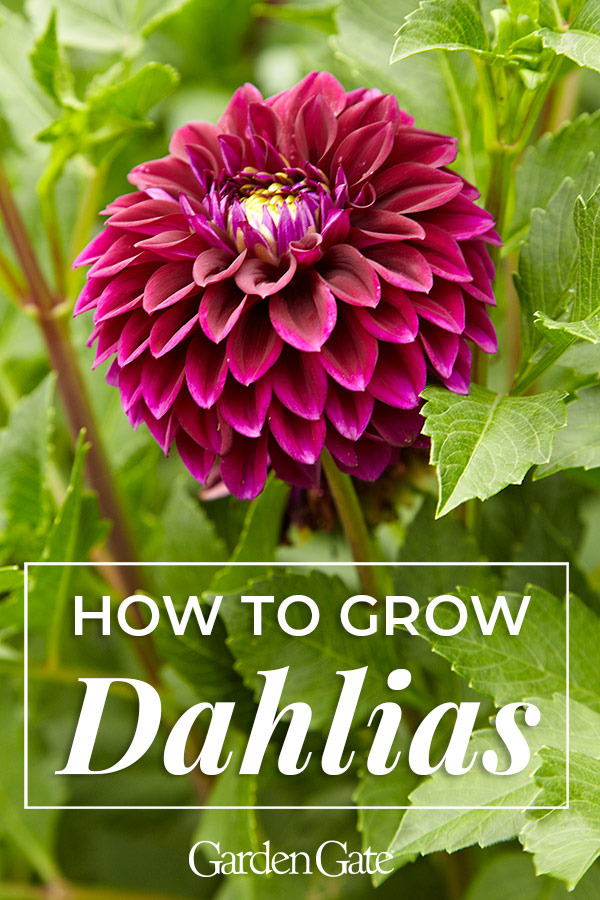 How to Collect Flower Seeds

Don’t forget to provide butterflies with nectar-rich flowers in the fall, too. Help out by growing one of these fall perennials butterflies love.

Watch our helpful how to video to create a unique stone mosaic that can be used as a stepper along a pathway or patio.

If tomato plant problems are causing your harvest to be less than bountiful, check out these common problems and find out what you can do.