Growing orchids is not as hard as you might think! Check out our tips to help you grow these unique flowers and learn more about the different types. 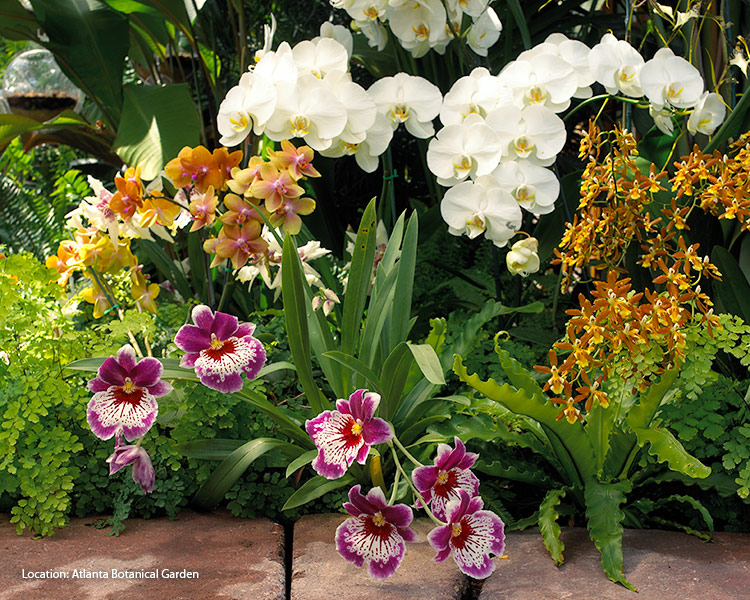 The beautiful world of orchids

These days you can find orchids for sale all over, but maybe you’ve avoided them. With such exotic flowers, you’d think orchids were hard to grow. But that’s a reputation not true for much of this enormous plant family. Don’t be scared — here are some frequently asked questions and tips for success!

What kind of orchid should I buy?

The best orchid to buy when first starting to grow them is the phalaenopsis (also known as the moth orchid), which is also the easiest to find and most reliable to get to bloom. It comes in a variety of colors (white, pink, purple, yellow, orange, apricot, eggplant, and nearly red) often with amazing spots, streaks, venations, and patterns.

Along with phalaenopsis, other orchids commonly found at florists and garden centers include paphiopedilum, or slipper orchids, and cattleya orchids. Scroll to the gallery at the end of this article to see how to care for these beauties.

The orchid family is enormous, so you may also be able to purchase other kinds such as inter-generic hybrids, vanda orchids, brassia orchids, oncidium orchids, and dendrobium orchids, all with more specialized growing conditions. 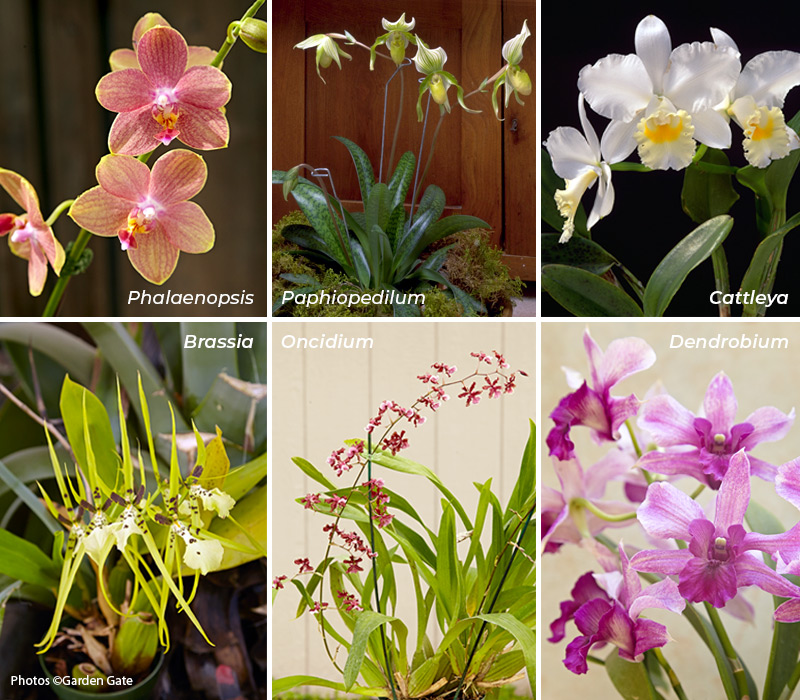 How much light does my orchid need?

Orchids should get at least six hours of good light each day from a window. To test a spot to see if it’s getting the right amount of light, hold your hand between the plant and the window, about a foot away from the orchid. If it casts a faint shadow on the leaves, you have enough light for phalaenopsis or paphiopedilum orchids. If it casts a sharp shadow, you can grow cattleyas.

If you don’t have a bright windowsill but still want to grow orchids, try a grow light. Hang the light (or you can use a 40-watt fluorescent shop light with one warm and one cool bulb) about 12 inches over your orchids for 12 to 14 hours a day.

How often should I fertilize?

Use the "Weekly weakly" rule of thumb: Feed orchids once a week with a water-soluble fertilizer mixed at half the strength recommended on the label. Once a month, flush with clear water.

What do I plant my orchid in?

There’s a vast selection of potting mediums to pot orchids in: sphagnum moss, lava rock, coconut husk chips and bark mix are the most common, or even a mix of several of these materials. There are advantages to each, but none is better than another. Just don’t use soil! Orchids need good drainage and air movement to their roots. You can find specialty orchid pots with holes in the sides that are great for air circulation. 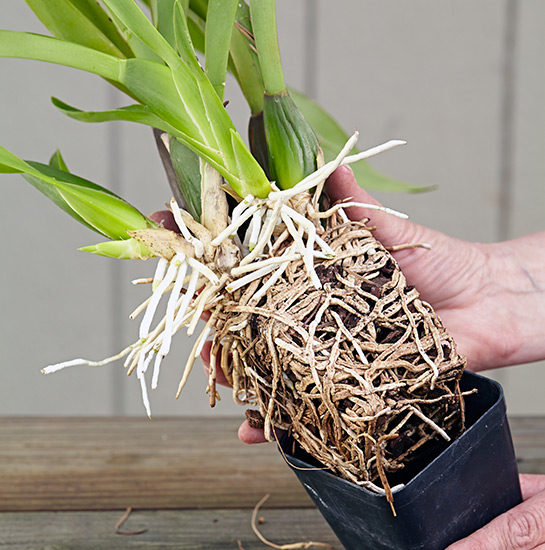 How do I know when it’s time to repot?

You might think the aerial roots poking out of the top of the pot are an indication to repot, but not necessarily. Those roots are there to attach to trees in the wild, as well as absorb moisture from the air and rainfall. Repot your orchid if the plant is overflowing the container as you see in the photo above.

You may also need to repot if the potting medium is breaking down. You can tell when a bark-based mix is breaking down if you pour water into the pot and it doesn’t flow freely out the drainage holes, or tiny bits that look like coffee grounds run out with the water. Most orchids potted in bark mixes need to be repotted every one to three years.

How do I repot my orchid?

If you think your orchid is ready to be repotted, check out our companion article and video with simple steps you can follow to keep your orchid going for years to come.

You Might Also Like:
Tips for Decorating with Houseplants
How to Make a Kokedama Project Video
DIY Plant Terrarium 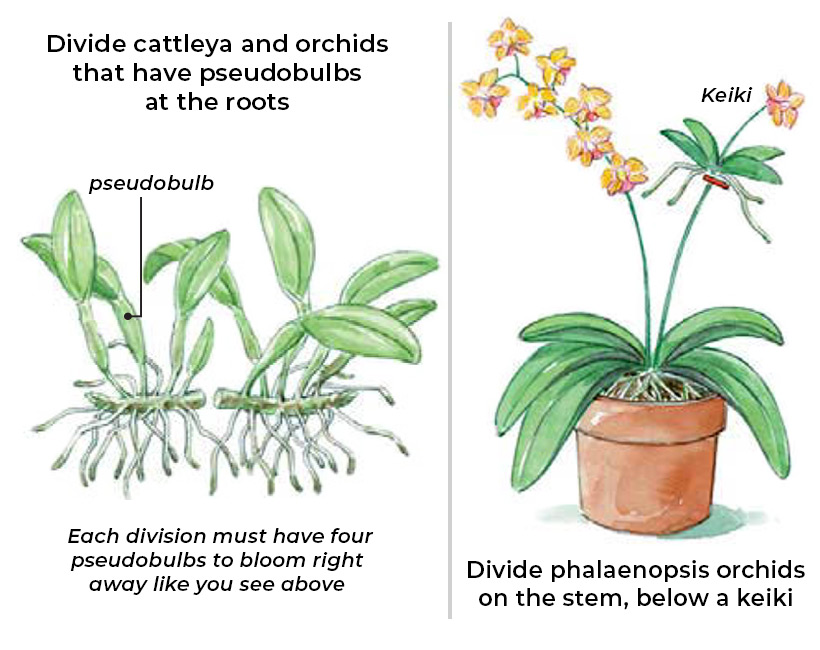 Can I divide my orchid?

Sure — especially if your plant is outgrowing its pot or even if you want another to share with a friend. Here's how to divide 3 common orchids:

Some orchids, such as cattleyas, oncidiums and many inter-generic hybrids, have pseudobulbs, or fleshy water storage organs, at the base of the leaf, as you see in the illustration above left. To divide this type of orchid, cut the rhizome and pull the divisions apart, leaving three to five pseudobulbs in each division. Set the cut edge toward the side of the pot so new pseudobulbs grow into the center.

Phalaenopsis can’t be traditionally divided at the roots because they emerge from a single stem. You can divide a phalaenopsis if it develops a keiki (pronounced “key key”) — a “baby” with roots and leaves — near the base of the plant or on a bloom spike, as in the illustration above right. If the keiki is blooming, as this one is, either cut the flower spike off so the plant will focus on growing, or wait until the bloom is done to remove it from the parent plant. When a keiki’s roots are 2 in. long, you can cut the plantlet off and pot it up. 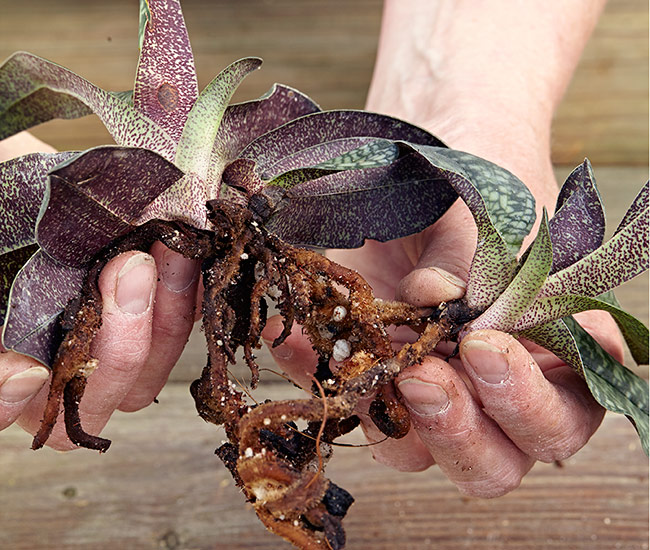 Paphiopedilum orchids send up new growth from the roots in fans that are easily separated. Just gently tug the fans apart, snipping the root that attaches them to the parent plant, then detangling the mingled roots as you pull the plants apart. 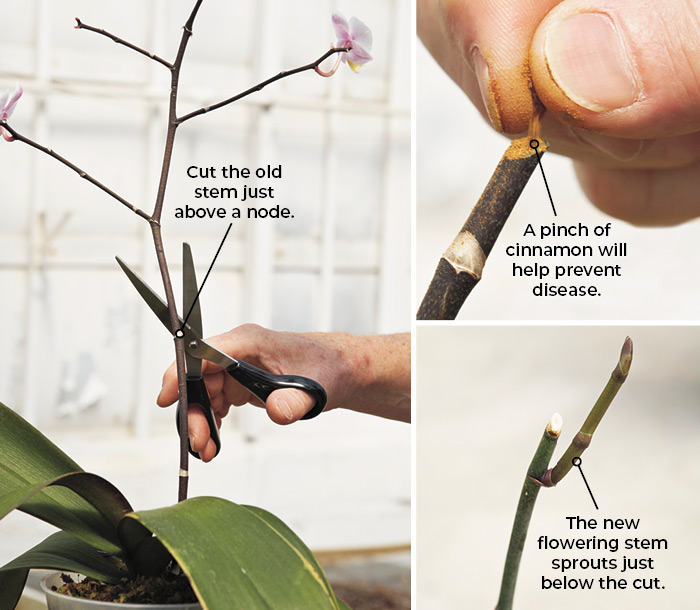 Should I cut off old flower stalks?

The spent flower stalk of most orchids will turn brown, so cut it off close to the foliage where it attaches. But if a phalaenopsis spike is still green like the one in the photo above, just cut the end off after the last bloom has fallen. Be sure to leave at least two nodes on that stem where a new spike, or possibly multiples, will form.

New flower spikes will form at nodes on the old bloom stalk. With every bloom cycle these flowers will be progressively smaller, so if that happens you’ll want to cut the whole stem off where it sprouts from the plant.

How do I get my orchids to rebloom?

One of the biggest challenges is getting your plant to rebloom, and a healthy orchid is more likely to flower than one under stress. Some orchids will bloom only seasonally when light and temperatures are just right, others will flower continually flower if they are happy. You may need to research your orchid variety to see what conditions they need to bloom so you can give them what they need.

You Might Also Like:
5 Home Remedies for Fungal Diseases in the Garden
Tips for Watering Houseplants
How to Deal with Garden Pests
Try Houseplants in Garden Containers

What's wrong with my orchid?

Give your orchid the proper conditions and care and they will thrive. But sometimes they tell you they aren't feeling well. Here are a few common problems you might encounter. 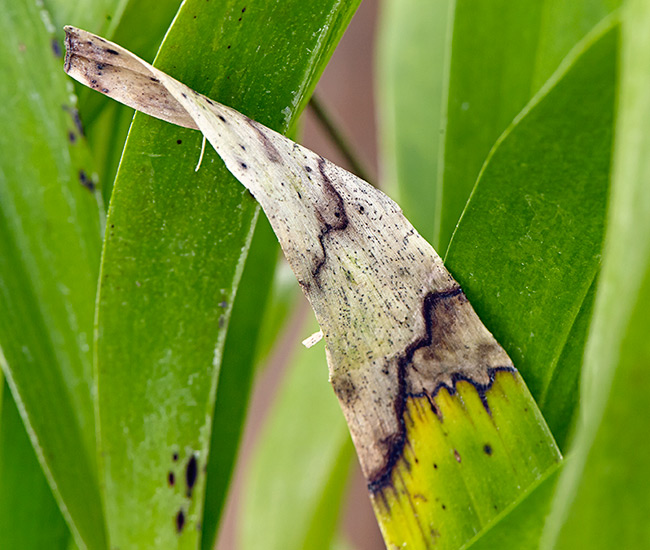 Browning leaf tips often mean plants need more humidity, so set the orchids on a one-inch tray of gravel filled with water to add humidity to the surrounding air or put a humidifier near your plants. Soft water and overfertilizing can also cause it. Correct the problem by flushing water through the potting medium until it runs clear from the drainage holes, then avoid fertilizing for several months. Damaged foliage can be trimmed off. 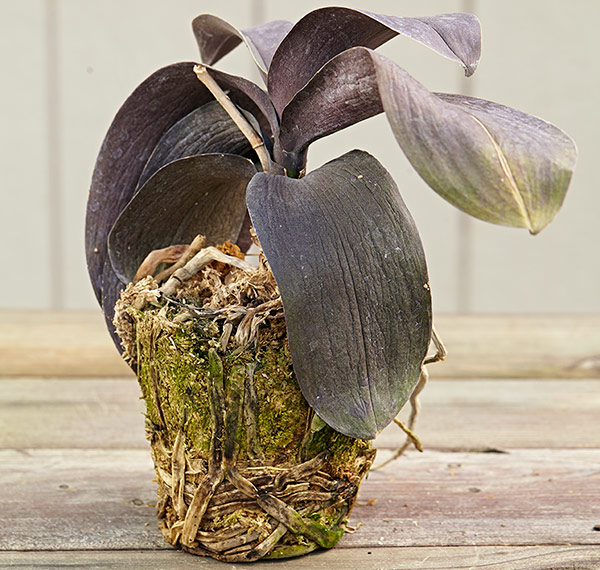 If leaves are wrinkled, it could be from underwatering or overwatering. Pull the plant out of the pot and examine the roots to be sure. Healthy roots will be white and fleshy. If they are too dry they will be slightly shriveled. Water the plant thoroughly (or soak the roots in a tub of water for an hour) and it will rehydrate. Overwatered orchid roots will be flattened, mushy, or black and the potting medium will be soggy. They are susceptible to disease and not likely to survive, even if you dry the plant out. The flattened, discolored roots and wrinkled leaves of the phalaenopsis above are signs of overwatering. 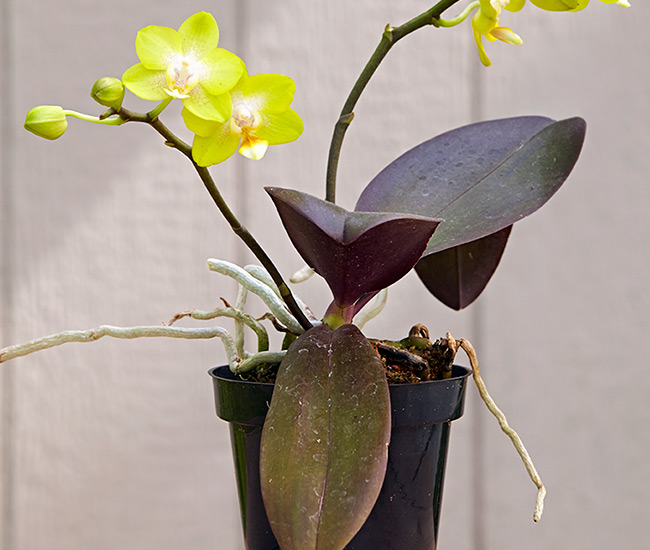 Though some orchids have speckled, mottled, or even dark foliage, purple or reddish colored leaves are often caused by too much light. Orchids may also become sunburned with foliage that looks scorched or bleached out in color. Move the plant to a spot with less intense light, or provide a bit of shade during the brightest time of the day.

Here are three orchids commonly available and how to care for them — give them what they need and they’ll reward you with a fantastic show.

Create a welcoming spot outside your back door with color, fragrance and flavor with this simple 10-plant patio garden design plan.

How to Grow Great Daylilies

Daylilies are one of the most diverse and colorful perennials you can add to your garden and they’re easy to grow! Learn how to plant and maintain stunning daylilies with this growing guide.

If you’ve never grown peas before, you should! Learn how to grow peas (and why they’re so great!) with tips from Angela Judd of Growing in the Garden.