Long-lasting flowers, clean foliage and good fall color are just some of the reasons to grow a spirea in your garden! Here's how to choose the best one for your spot (and how to prune the ones you already have). 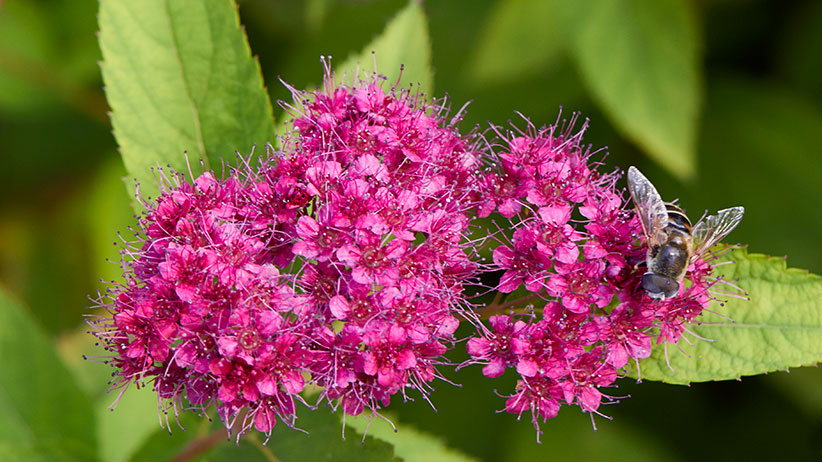 You have to love a shrub that can take it on the chin and keep coming back. From broiling hot to bitter cold, it survives, and even thrives. Because it’s so durable, it’s found in every mall and gas station planting you drive past. But with all of the challenges gardeners encounter, like poor soil and hungry pests, this shrub deserves a spot in every garden because it can handle it all.

There are lots of spireas to choose from. Some, like the well-known Vanhoutte spirea, often called “bridalwreath,” can grow to be more than 8 feet tall. But most of the rest of the types stay under 5 feet, or shorter with a little pruning. They’re a perfect fit in most anyone’s garden. Let’s take a closer look at what makes these shrubs so great! 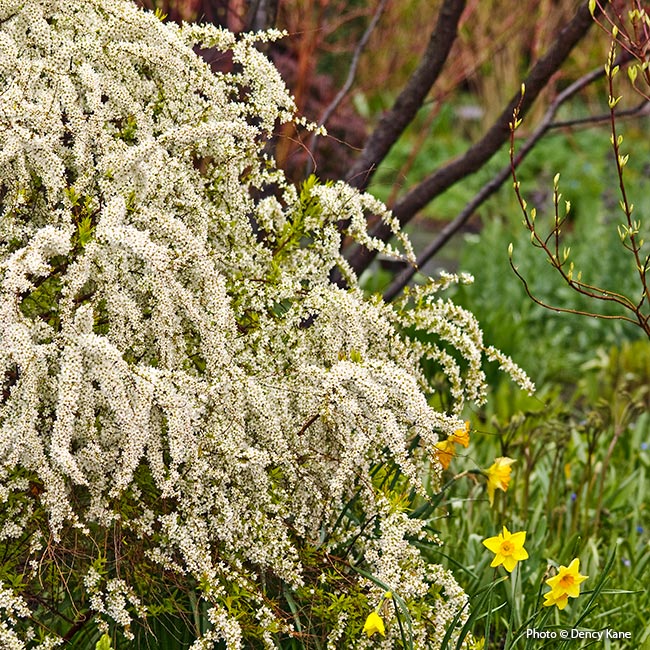 Garland spirea is the first to bloom. It has tiny white stars along the stems that open about the same time as daffodils, which differentiates itself from most cultivars of spireas which bloom in early to midsummer with flat clusters of fuzzy flowers.

For summer-blooming spirea, here are some of the best:

Not all of summer-blooming spireas have pink flowers. Korean spirea and birchleaf spirea are two of the best that both bloom white. No matter what color the flowers are, bees and butterflies will be drawn to them. And since most of these spireas rebloom well into late summer, there’s a steady supply to keep winged visitors fed.

Spireas have no major insect pests or diseases so their foliage always looks good. On some cultivars, such as ‘Neon Flash’, ‘Magic Carpet’ and the Double Play® series, new growth has a burgundy tint that slowly ages to green. Some other cultivars with notable foliage include: 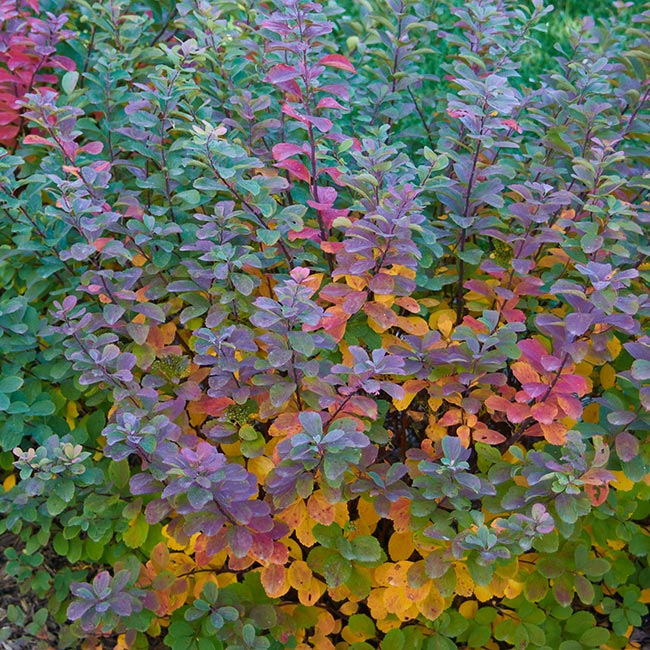 When fall rolls around, most spireas’ foliage changes to yellow, orange or red. They turn late, so if you have an early killing frost, they may not change at all. But one of the best, and most consistent for purple-red autumn color, is ‘Tor’ birchleaf spirea. You can see its autumn color above. Next, I’ll share some design ideas about where to add low growing spireas to your garden. And you’ll find tips on how to take care of them so they always look their best, too. 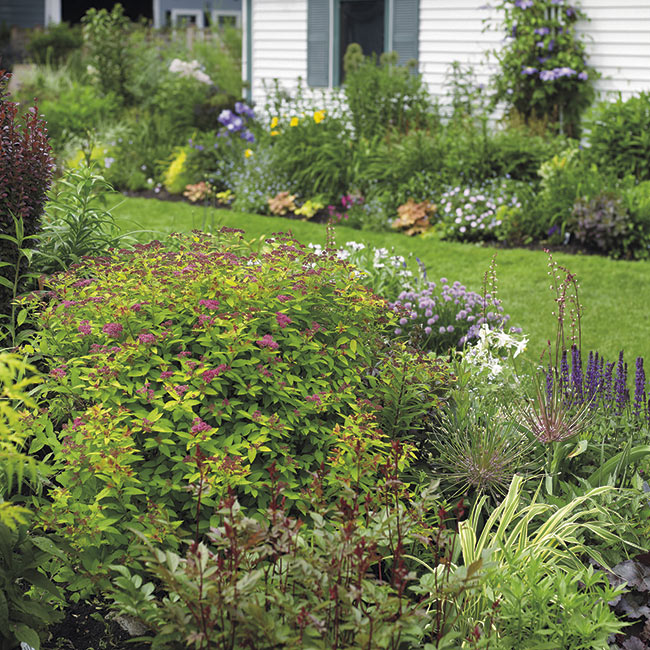 How to design with spirea

This is one versatile shrub — it’ll feel at home in almost any situation. It’s a standout in a perennial border. The dense habit, long bloom time and colorful foliage of ‘Goldflame’ Japanese spirea make it a great companion in a flower bed. At just 3 to 4 feet tall, it’s perfect in the middle to back of a border. And because the woody stems are so sturdy, they can help hold up floppy neighbors.

What to plant with spirea

Most spirea have fine-textured foliage. Choose neighbors for them that have a coarser texture to create interesting contrasts. They look especially good paired with bigleaf hydrangeas. Or set them near clumps of hostas that will take some sun. Since spirea blossoms are mainly flat clusters, contrast the flower shapes you plant nearby. Narrow purple spikes of salvia or upright plumes of astilbe add nice variety.

Whether you have a small or a large garden, spireas really shine in shrub borders. Their size works well in a foundation planting. And you won’t have to do lots of summer pruning to keep them from covering windows. In a large garden, along a tall shrub border, place a few mounding spireas as an edging. Their longlasting flowers or colorful foliage will give you something to look at all summer. Up front they may cost more than annuals but in the long run shrubs will save you money and time.

Count on their fast growth

Looking to fill a large area, but don’t want to wait a long time to see results? Spireas are fast growers, maturing in just a couple of years in ideal conditions. Even when you start with small sizes they’ll take off quickly. Don’t just plant one, plant a group for a big effect.

To grow them as a mass, set individual plants so their tips will touch as they mature. Or if you want a denser cover, plant them half the recommended distance apart.

How to maintain spirea

Spireas tolerate difficult conditions, such as clay and shade, but they’ll give you bigger flowers and more robust growth in full sun and well-drained soil. Don’t bother feeding spireas. In fact, if they’re overfed with nitrogen, they grow lush and leafy with few flowers. All you need to do to get the best flowers and keep the shrub tidy is some pruning.

Keep in mind that you won’t (probably can’t!) kill a spirea by pruning it. The worst that will happen is that it may not bloom for a year. Garland spirea rarely needs much trimming, but if you want to tidy up the shape, cut it back right after the flowers fade. When it comes to summer-flowering cultivars, check out three easy ways to prune them, as well as the best time of year to do it, here. 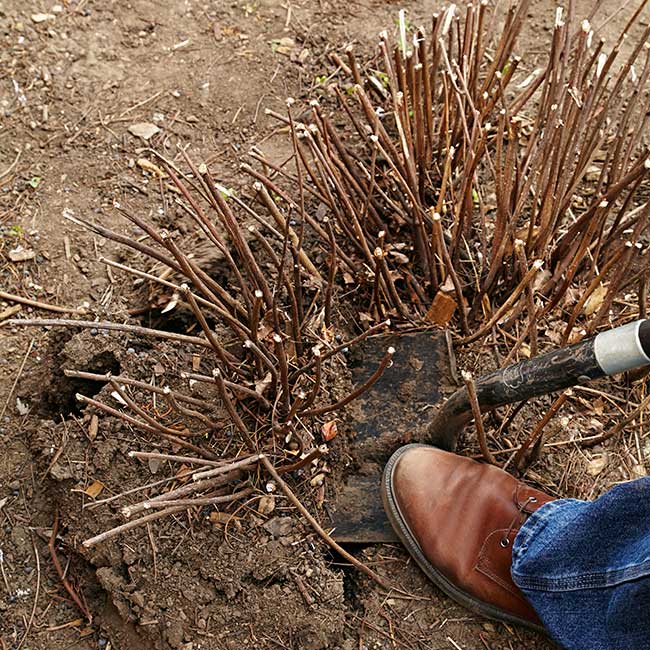 A little-known fact is that you can dig and divide most spireas. An old clump with a dead or dying center and lots of healthy growth around the edges can be lifted and split with a saw or sharp pruning shears, just like a perennial. It’s an inexpensive way to expand your garden beds and borders.

Several of the older Japanese spirea, such as ‘Anthony Waterer’, are invasive in some areas, especially along the East Coast. Many of the newer cultivars are not a problem. You may want to check with your county extension service before you plant any spirea in your garden.

You Might Also Like:
Your Handy Shrub Pruning Guide
How to Clean and Sharpen Old Tools
How to Divide 45+ Perennials
DIY Potting Bench

Find a spirea for your garden

If spireas have always made you yawn, it’s time to give them another chance. There’s a lot to love — they’re nearly pest-free and bloom for weeks. Plus they’re easy to prune or fine if you leave them alone. One is sure to be just the right fit for that tough spot in your flower bed, shrub border or foundation planting. Check out the details of the 6 spirea cultivars below, and then find a spot to plant it in your space!

How to Grow Vegetables in a Galvanized Raised Garden Bed

Learn how these gardeners turned a corner of their yard into a great-looking vegetable garden in galvanized raised garden beds.

Looking to replace that old garden hose this season? Discover the pros and cons of different types of garden hoses and tips for keeping this essential tool in great shape.

How to Grow Coleus

If you love funky foliage, check out our ideas and tips for growing the best coleus plants. Plus learn the secret to rooting them in water easily.