Learn how to keep the eastern wild turkey from doing lots of damage in your yard and garden. 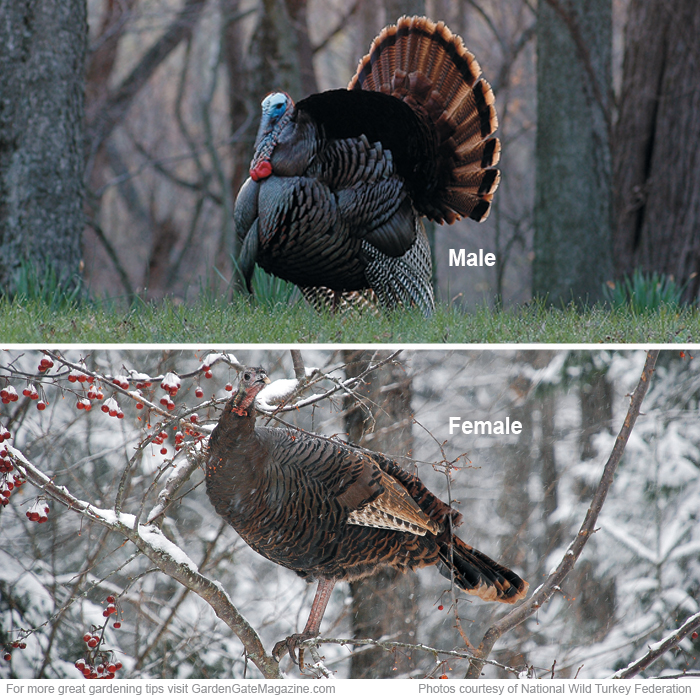 IDENTIFICATION Found in roughly half of the United States, from regions of North Dakota to Texas, all the way to Maine and Florida, the eastern wild turkey also inhabits areas along the West Coast, as well as southern Canada.

Up to 4 ft. tall and weighing about 20 pounds, a mature male, also called a “gobbler” or “tom,” displays bold colors and plumage patterns. The top left photo shows its iridescent blue head and chest and bright red caruncle, the fleshy gathering of skin at the front of its neck — the male’s most distinct features.

Mature females, or “hens,” can grow just as tall as males but weigh less, at 8 to 12 pounds. Their smaller bodies are much less showy, remaining brown throughout most of the year, like in the photo at bottom left.

DAMAGE PREVENTION The eastern wild turkey is very social, cohabitating in broods with home ranges. A visit can be devastating to your garden — only 10 percent of their diet consists of insects; the rest is plants.

If you find them scratching in your yard, grab the garden hose and shoot a steady stream until the whole brood is forced away. Dogs are a threat, as well, but if you find yourself alone, try making as much noise and arm movement as possible to scare them off. And if you know a brood is visiting your garden regularly, protect fruit-bearing trees, or other favorite plants, with bird netting to discourage the group from returning.

Create interest all season with this tried-and-true design tip the pros use!

Find out more about this gorgeous, easy-care Oriental poppy.