This weed gets its name from the black spots on the small leaves, or bracts, at the base of each flower. Spotted knapweed is an aggressive perennial that only lives about three to seven years. 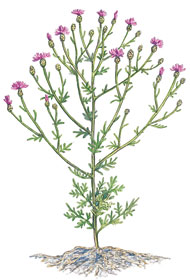 IDENTIFICATION — This weed gets its name from the black spots on the small leaves, or bracts, at the base of each flower. Spotted knapweed is an aggressive perennial that only lives about three to seven years. The first year of its life, you’ll spot a low rosette of leaves. In following years, it grows 2 to 4 ft. tall and from early July through August produces numerous pink and purple flowers. Each mature plant can produce more than 1,000 seeds per year, which can remain viable in the soil at least five years.

FAVORITE CONDITIONS — Found almost everywhere in North America except the Deep South, desert areas and the Rocky Mountains, this weed prefers spots that have been tilled and then left undisturbed. You’ll find it in perennial beds, shrub borders and fencerows. It spreads quickly in well-drained, light-textured soil and full sun or part shade.

CONTROL — This plant is allelopathic, meaning it releases a toxin that inhibits the growth of nearby plants. So you definitely want to get rid of it. Remove small infestations by digging or pulling while the soil is moist. But make sure to remove the entire root or this pest will quickly grow back.

In areas where it’s well established, you’ll need to use herbicides. Either a selective product, such as 2,4-D, or a non-selective one, such as Roundup®, can be used. After the initial treatment, monitor the area to control any missed plants or new seedlings. Because the seeds live in the soil for years, you’ll have to pull occasional seedlings for quite a while.

Slide show: Ornaments in the garden