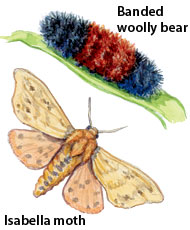 IDENTIFICATION — Cool fall temperatures bring out fuzzy little caterpillars called “woolly bears,” or “woolly worms.” About 2 in. long, banded woolly bears are covered in bristly black hair in the front and back with a band of rusty brown wrapped around their middle. It’s hard to tell which end is which unless you see the caterpillar in motion.

Woolly bears are the immature stage of the Isabella moth, which flutters through yards and hovers around outdoor lights from April to August. It has a wingspan of 2 to 2 1/2 in. with straw-colored forewings (the wings on top) and darker hind wings with a touch of orange at the tips. Black spots are scattered across both sets of wings and along the body of the moth.

LIFE CYCLE — There are usually two generations of woolly bears each year. Eggs hatch in May, with another generation emerging in August. Hungry caterpillars eat a wide variety of plant material, including weeds like plantain, dandelion and nettles. They also eat grasses, asters and sunflowers and leaves from birches, elms and maples, but they’re rarely a serious problem. The spring generation has time to complete an entire life cycle. But caterpillars that hatch in summer spend the winter hibernating under garden debris. Warm spring temperatures wake the woolly bears. After a brief feeding period, they spin fuzzy cocoons in sheltered spots, such as wood piles. In two to three weeks, adult moths emerge and the cycle begins again.

You may have heard the folk tale that the wider the brown bands on the caterpillar, the milder the winter will be. However, studies have shown that the brown band is a better indicator of the age of the caterpillar and previous rainfall. Older woolly bears and those that grow in an area with plenty of moisture tend to have smaller brown bands. 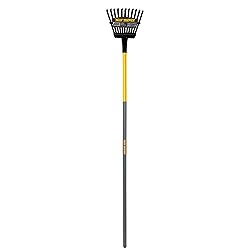 Want to know an easy way to add a big punch of color to your garden? Grow plants with huge flowers!