Long feared as dark-winged predators of the night, little brown bats are actually great to have flitting around your garden. 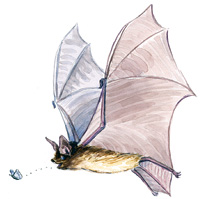 IDENTIFICATION — Long feared as dark-winged predators of the night, little brown bats are actually great to have flitting around your garden. These airborne mammals eat thousands of flying insect pests each night, including mosquitoes, flies, moths and beetles. One bat can devour more than 600 mosquitoes in an hour — that’s 10 bugs a minute! In the summertime, bats will eat almost half their weight in insects every night. A little brown bat weighs only 1/4 to 1/3 ounce and is 3 to 4 in. long, with a wingspan of 6 to 8 in. Its large ears help the little brown bat echolocate, or hear a high-pitched frequency that helps it to “see” insects in the dark.

LIFE CYCLE — This bat is found everywhere in the United States and in parts of southern Canada and northern Mexico. Little brown bats have one offspring, or pup, a year. The pup hangs onto its mother for the first few days after birth, even when she’s flying! In three weeks, it’s ready to fly on its own and begin hunting insects. Unlike other small mammals that live only a year or two, the little brown bat can live up to 32 years!

To attract bats to your garden, plant flowers like nicotiana, four o’clocks, petunias and moonflower, which are food sources for night-pollinating insects. Once the bats show up, they’re sure to make a dent in the local mosquito population, too. Avoiding insecticides whenever possible and providing a water source will also encourage bats to make your yard their hunting ground.

Bats migrate to caves, cellars, tunnels, attics or old buildings to hibernate as temperatures and insect populations drop in late autumn. Although they’re great to have in the yard, you don’t want them spending the winter in your house. Make sure you seal all openings that are larger than 1/2 in. — bats can get into some pretty tiny spaces.

Secrets to dividing in summer

This is a plant with a lot of common names. You might also hear it called “magic lily” or “resurrection lily.” But whatever you call it, it’s a late-summer star.

How to identify and prevent rose rosette disease

Rose rosette is caused by an organism similar to a virus that’s transmitted by mites. Although you usually find it in weedy multiflora rose, all roses are susceptible.