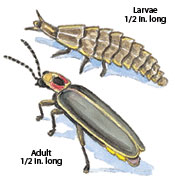 IDENTIFICATION — Adult fireflies (also called lightning bugs) are actually winged beetles, not flies. Several species are found throughout the United States and Canada but the Eastern firefly is one of the most common. It’s found east of the Rocky Mountains in open, grassy areas.

With two red spots on their heads, adults have brown-black wings, edged with a light yellow stripe. During the day they seek out dark, damp places to rest, so you may not notice them. But it’s hard to miss these guys on hot summer evenings when they’re flashing their tail lights over and over. Summer is peak mating season for fireflies and the flashes of light are their mating calls. But the adults aren’t the only ones that light up — the segmented, six-legged larvae, and even the eggs, light up, too.

LIFE CYCLE — In early summer, the adults surface after a year underground. Around dusk, the males begin to fly and flash in search of a mate. Females respond with flashes, mate and deposit eggs singly or in groups in the soil around grass roots. Both adults die shortly after mating. Eggs hatch in about three weeks, and the larvae overwinter underground, emerging in the spring to begin the process again.

HOW TO ATTRACT — Both the firefly and its flightless larvae are good to have around. They eat aphids, slugs, earthworms, mites and pollen. Make your garden attractive to these bugs by giving them bark or mulch to hide under. Grow small trees and shrubs so flightless females have a spot to wait for their mates. Light pollution interferes with the mating process, making these insects harder to find in urban areas. So turn off the porch light to help them feel at home.

Whether you’re designing a perennial border or just placing a few containers on your deck, color is important.

Like an alien in a science fiction movie, the roots of hemp dogbane keep spreading as if they’re going to take over the world.