Like an alien in a science fiction movie, the roots of hemp dogbane keep spreading as if they’re going to take over the world. 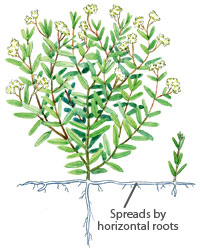 IDENTIFICATION — Like an alien in a science fiction movie, the roots of hemp dogbane keep spreading as if they’re going to take over the world. Their long horizontal roots can spread more than 20 ft., eventually forming colonies that will squeeze out other plants.

The red-brown stems of hemp dogbane, sometimes known as “Indian hemp,” “bitterroot,” “rheumatism weed” or “Choctaw-root,” can grow up to 6 ft. tall. While young, the plant looks a bit like a milkweed. If you break the stem or leaves, you’ll discover a milky white sap, which is toxic if ingested. Small bell-shaped pale-green flowers bloom in clusters near the tips of the stems from June to August. Later, two 2- to 4-in.-long seed pods replace each flower. These pods are filled with tiny brown seeds that have tufts of white fuzz to help them float on the wind.

FAVORITE CONDITIONS — Hemp dogbane can be found in fields, thickets and open woods all over North America. It prefers moist soil, but once it’s established, the extensive root system makes it quite drought tolerant. In home gardens, you’re most likely to find it in shrub borders, low areas, like ditches, and in fence rows. You’ll rarely see this weed in garden areas that are regularly cultivated.

CONTROL —?Working the soil repeatedly will help control hemp dogbane. Till young plants under before they reach 10 in. tall and have a chance to become established. If you can turn the soil and expose the roots during hot and dry weather, those roots will be less likely to resprout. You’ll need to till the area several times a year, and over a period of years, to eradicate all of the roots.

Because it’s such an aggressive spreader, hemp dogbane is most quickly controlled with herbicides, such as 2,4-D or Roundup®. Apply them in the spring when the plant is just beginning to bloom or in late summer before the leaves turn yellow.

Garden phlox in hot areas are rarely happy plants. But ‘John Fanick’, a 3-ft.-tall cultivar, was discovered growing just fine in San Antonio, Texas, where it can get very hot.

You don’t need to kiss them to turn them into the princes of your garden. While toads aren’t handsome creatures, they do provide a wonderful service.