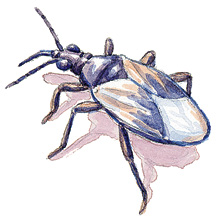 IDENTIFICATION — It may be tiny, but this 1/4-in.-long bug has a big appetite — for other bugs, that is. The minute pirate bug is most common in the western United States and Canada. It has an oval-shaped body with black and white wings like the one in the illustration.

If you pick up a minute pirate bug, watch out! It will bite. Reactions range from nothing other than the initial discomfort to a small bump similar to a mosquito bite, without the itch. Think you’ve seen this bug in the Midwest? It’s probably the insidious flower bug (O. insidiosus), a close cousin.

LIFE CYCLE — In spring, minute pirate bugs lay eggs in plant stems or leaf tissues. Eggs hatch in three to five days, and the nymphs immediately start looking for small insects on which to feed. It takes about 20 days and five stages for a minute pirate bug to reach adulthood. Then after about a month it dies. Several generations of this bug can occur over the course of a growing season.

You probably already have minute pirate bugs or insidious flower bugs in your garden. But to keep them around and perhaps attract a few more, avoid spraying insecticides. Also, grow flat-topped flowers like daisies and yarrow, whose pollen is easy to get at. That way, these little garden helpers will have something to keep them going once they’ve whittled down the pest population in your garden.

Five tips for a weed-free path

What better way to celebrate spring than with lots of vibrant flowers! Here are a few favorite spring showoffs in a range of sizes to fit any garden.

Growing up to 3 ft. tall, this upright grass has wispy seedheads that look iridescent in the sunshine.