If your Colorado spruce (Picea pungens) has dead branches, Cytospora canker could be to blame. 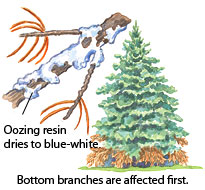 IDENTIFICATION — If your Colorado spruce (Picea pungens) has dead branches, Cytospora canker could be to blame. Yellowing needles is the first noticeable symptom. The discolored needles show up in spring or early summer, change to purple, then turn brown and fall off in winter. The process is repeated each season until an entire branch is dead. A closer look shows a clear, sticky resin oozing from the affected branch. Over time, the resin accumulates to form a ridge surrounding the canker, or dead tissue, and dries blue-white. Any branch on the tree can become infected, but the lower ones tend to be first. Cytospora canker won’t usually kill the tree, but it does disfigure it.

DAMAGE — This disease is caused by a fungus called Cytospora kunzei (or Leucostoma kunzei), which enters through wounds. The fungus is spread by wind, rain, insects, birds and mammals. Cankers generally start at the base of a branch and grow around it until the branch is girdled and dies. It can take several years or even decades to girdle a large limb or the trunk.

Colorado spruce living east of the Rocky Mountains are most often affected. Spruces 10 to 15 years old and those stressed by environmental factors, such as drought, are most susceptible. Norway spruce, Douglas fir and other evergreens can also become infected, although less often.

CONTROL — There’s no cure for Cytospora canker, but there are some preventative measures you can take. First of all, avoid environmental stresses by planting your spruce in moist, well-drained soil and giving it plenty of space to grow. Deep watering during dry periods and annual fertilizing will keep your tree healthy. Also, avoid injuries to the bark so the fungus won’t have an entry point.

If you notice infection, remove the affected branch close to the trunk during dry weather so rain doesn’t carry spores into the wound. Clean your pruning shears or saw in a 10-percent bleach solution between cuts.

Get perennials ready for spring

Fences work hard, keeping pets and kids in the yard or out of the street and letting visitors know where to go and not to go.

The line between wildflower and weed can be narrow. With chicory, what one person considers a lovely blue flower, a neighbor might consider a weed.