Originally introduced from Europe for use as a dried flower, Fuller’s teasel has naturalized in much of North America. 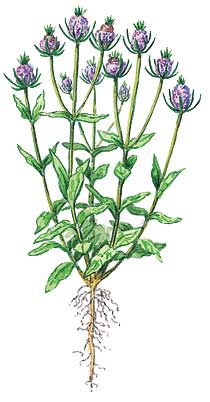 IDENTIFICATION — Originally introduced from Europe for use as a dried flower, Fuller’s teasel has naturalized in much of North America. The first year, this biennial forms a rosette of oblong leaves that may grow to nearly 12 in. long. During the second year, several flower stalks with spines shoot up nearly 6 ft. The spiny egg-shaped lavender flowers bloom from June to October. After flowering and producing seed, the plant dies.

FAVORITE CONDITIONS — Fuller’s teasel prefers open, sunny sites like roadsides and disturbed areas, although it may grow in your lawn or garden. It’s a particular pest for restored prairies and wildlife areas because each plant is capable of producing more than 2,000 seeds and most of them will germinate. Under favorable growing conditions, it can actually outcompete native prairie plants.

CONTROL — As with all biennial weeds, it’s easier to manage Fuller’s teasel in the rosette stage. Use a dandelion-puller to pull out the long tap root or slice it off, below the soil, with a sharp spade. And as with dandelions, be sure to get as much of the root as possible so it won’t resprout. You can cut off the flower head to prevent it from going to seed. Herbicides that contain triclopyr or glyphosate can also be used, but are most effective when applied while the plants are in the rosette stage before they flower.

Nothing says “fall” like a pumpkin, so what could be more perfect to use for a fall container?

This invasive biennial is related to the edible parsnips you may grow in your vegetable garden.