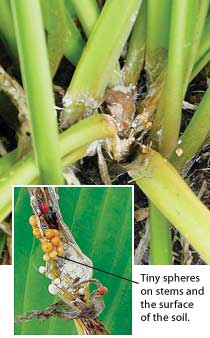 IDENTIFICATION — Crown rot affects hosta, bleeding heart, phlox, daylily and many other perennials. Yellowing foliage and mushy stems appear just above the soil line. It can start any time during the growing season, but it’s most prevalent during hot, humid periods. Once called Southern blight, this fatal rot is now spreading into much of North America.

DAMAGE — Crown rot organisms live near the surface of the soil, waiting to enter a plant and destroy the tissue. It kills the plant if it’s not stopped, and can become a permanent problem in your garden.

CONTROL — Dig infected plants and remove the top 12 in. of soil. Bury everything in a hole several feet deep to keep the spores from spreading. Never add infected plants to your compost pile. One fungicide, Terrachlor®, may save infected plants if it’s applied before the entire crown has rotted.

Light up your garden

Not many flowers rival the welcome splash of color that spring bulbs can give you. But if you’ve ever planted them in fall, you can appreciate the effort that goes into planting.

If you have an ash tree (Fraxinus spp.), keep an eye out for emerald ash borer.