There are several kinds of caterpillars that spin webs in trees, but you’ll see Eastern tent caterpillars and their webs in late spring or early summer. 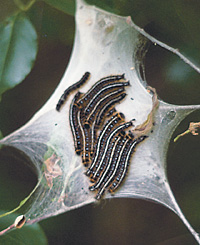 IDENTIFICATION — There are several kinds of caterpillars that spin webs in trees, but you’ll see Eastern tent caterpillars and their webs in late spring or early summer. They’re black, with irregular blue and white markings and a solid white stripe down the back. Adult moths are about 1 in. long and red-brown with two white stripes on the front wings.

DAMAGE — Usually, the worst thing about these caterpillars is that their webs look messy, but the pests can defoliate and stress small trees. You’ll see webs in the forks of twigs or branches of trees east of the Rocky Mountains. Webs usually don’t enclose leaves, as the caterpillars leave the webs to feed. They generally feed in the morning or evening, when it’s cool, but may also feed during the day. If it’s raining or hot, they often retreat to the web.

CONTROL — You can pull down the webs, pests and all, and destroy them. Check the web first to be sure the caterpillars are “at home.” Wear gloves, because the hairs on the caterpillars can irritate some people’s skin. A strong jet of water can help knock down webs that are too high to reach.

Bt (Bacillus thuringiensis) is a common control, but it has to penetrate the webs to be effective. And you may need a professional to spray a large tree.

Most plants have trouble growing in clay soil. But adding enough organic matter to improve the situation can be back-breaking work. Don’t worry, here are plants that tolerate and even thrive in the stuff!

These larvae of a non-stinging wasp have green heads and bodies without stripes or spots.