Hemlock woolly adelgids are relatively easy to identify because they’re woolly. You will find wooly adelgids on the undersides of hemlock needles and twigs. 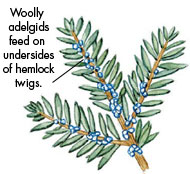 IDENTIFICATION – Hemlock woolly adelgids are relatively easy to identify because they’re woolly. You will find wooly adelgids on the undersides of hemlock needles and twigs. The white fuzz protects the young from predators. Adelgids feed on the tree sap and, while feeding, inject their toxic saliva into new needles and buds causing them to dry out and fall off. This damage weakens the tree’s health and could lead to the death of a mature tree in three or four years. The hemlock woolly adelgids prefer Eastern hemlocks (Tsuga Canadensis) and Carolina hemlocks (Tsuga caroliniana) which are more prevalent in the eastern United States.

LIFE CYCLE – This pest was accidentally introduced from Japan and China in the 1950s. The hemlock woolly adelgid spends winter as an adult. Females begin laying eggs in late March. The eggs hatch in April. A second generation follows the first, but experiences a short dormancy period during midsummer. The second generation resumes growth and damage in fall.

CONTROL – Healthy trees deal with adelgids best, so keep trees well-watered. Fertilize only after you’ve gotten rid of the pests. They can hitch a ride on anything, so look for adelgids in other yards or the woods, especially from March through June. Insecticidal soap or horticultural oil, applied in early April and again in June, can control adelgids. Chemical sprays like imidacloprid can be used for a heavy infestation. Contact a local tree-care professional to find the best way to treat your trees.

In spring, most gardeners have a cluster of newly purchased plants waiting to be set in the ground.