A good word to describe crown gall on roses and other ornamental plants is “yuck.” The lumpy growths around the base of the plant are unattractive, to say the least. 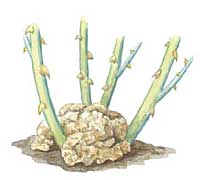 IDENTIFICATION – A good word to describe crown gall on roses and other ornamental plants is “yuck.” The lumpy growths around the base of the plant are unattractive, to say the least. This disease, caused by the bacterium Agrobacterium tumefaciens, is found on a wide range of plants, including roses, euonymus, junipers, fruit trees and willows, as well as annuals like impatiens and begonias.

Usually, you’ll notice rough, woody growths (galls) on the stems and branches of the plant near the soil line. The galls form on the roots of some species. On trees, they may even form among the branches. There’s often one big swelling, with several smaller ones nearby.

Galls are green at first, but become rougher and browner as they grow. Galls eventually rot and crumble away, with new gall tissue forming underneath. On small plants and shrubs, the galls are usually 2 or 3 in. across, but they can be much larger on trees, weighing as much as 50 lbs. Plants can live for a long time with crown gall, but they may become weak and stunted as the gall interferes with the uptake of water and nutrients. If the gall completely encircles the stem or trunk, the plant may die.

CONTROL – The bacteria, which can live in the soil for several years, enters through wounds near the plant’s base. So the best control is prevention — don’t damage plants close to the soil line, and protect them from damage by mowers, insects and animals.

Unfortunately, once the galls are present, the only real control is to remove the plant and as much soil around it as possible. As the galls decay, they shed bacteria into the soil, so it’s best not to leave the plant in place. When you prune plants, especially near the base, sterilize your pruners or saw with a solution of 1 part bleach to 4 parts water. Check for galls on new plants before you put them in your garden. And if you’ve had problems with crown gall, don’t plant susceptible species in the same area for three to five years.

Fritillaria bulbs of all sizes

Most bulbs do best with a planting depth of three times the height of the bulb, and fritillarias are no different. All I can say is don’t scrimp on this.

Although this perennial weed grows only 3 to 4 ft. high, its roots may spread up to 14 ft. below ground.