Ever notice a pink slime on your lawn in spring? It might be snow mold. This fungus attacks grass at temperatures between 40 and 60 degrees. 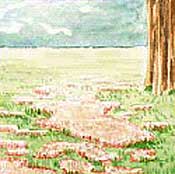 IDENTIFICATION – Ever notice a pink slime on your lawn in spring? It might be snow mold. This fungus attacks grass at temperatures between 40 and 60 degrees. It needs prolonged dampness from cold fogs, drizzle or melting snow to infest blades that have been damaged under heavy snow or traffic. The grass blades first appear slick and brown in 6- to 8-in. circles. The disease then spreads outward, leaving pink-bordered white patches in a ring effect.

DAMAGE – Under ideal conditions, the grass inside a ring sometimes grows back, but the usual result is a dead spot in the lawn.

CONTROL – Prevention is the most effective control. Keep turf mowed very short through late fall, and don’t apply fertilizers containing nitrogen within six weeks of the lawn going fully dormant. The fungi thrive on succulent new growth. Dethatching and a regular raking will also help. Home-use fungicides, such as Ornathal, Rubigan and Bromosan, work well on spots where snow mold has shown up before. But you’ll need to apply them early in spring before the symptoms appear.

Moving a plant in the heat

It’s not ideal. But sometimes you can’t avoid moving a plant in the middle of summer. However, this project doesn’t have to spell disaster (or crispy plants).

At first glance, the meadow rue leaves below might look fine. But see how the veins are still green and the rest of the leaf is beginning to turn yellow? That’s the early sign of chlorosis.