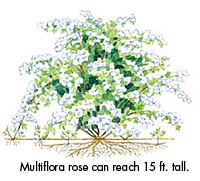 IDENTIFICATION – Multiflora rose has many characteristics of ornamental roses. The fragrant white to pink summer flowers are followed by bright-red rose hips that persist through winter. But this plant is an aggressive shrub with wicked hooked thorns.

A single multiflora plant can grow upwards of 15 ft. tall and produce a million seeds that can last 20 years. It also multiplies by suckers or when its sprawling stems arch down to the ground and take root. Because of its unstoppable growth, it’s illegal to sell multiflora rose in several states. Check with your state’s Department of Natural Resources, or in Canada, with Natural Resources Canada at www.nrcan.gc.ca.

FAVORITE CONDITIONS – Multiflora rose thrives in many conditions, but it prefers full sun and soil with good drainage. It won’t grow in standing water or extremely dry soils. From the 1930s to the 1960s, it was actually distributed in the United States as an ornamental plant and as a “living fence” to help control soil erosion. It soon became an invasive pest, and now multiflora is widespread in the United States and southern Canada. If this plant grows anywhere near your garden, expect to have problems keeping it out!

CONTROL – This weed is tough to get rid of. You can mow young plants, dig them up before they’re established or pull them out by hand – wear gloves because the thorns are sharp. Remove all of the roots, as multiflora can regrow from any left in the soil. For older plants, try cutting or mowing. But be careful – the thorns may puncture mower tires, not to mention your skin! If you choose to brave the thorns, you’ll have to keep at it three to six times each growing season, for two to four years.

Herbicides are a less painful method of control. Late in the season, apply a gylphosate, such as Roundup®, to freshly cut stumps. Spray 2, 4-D or triclopyr when the plant is actively growing in fall. Because the seeds can live for so long in the soil, you’ll have to watch the area and be ready for follow-up treatments.

Keep Your Hands Safe with The Best Digging Gloves

Keep Your Plants Moist Using the Best Self Watering Planters

Spruce Up Your Garden with the Best Trough Planters

Our Team’s Review Of The Best Sprinkler Heads

Our Team’s Review Of The Best Hammock Swing Chairs

Measure Humidity with the Best Hygrometer

Grow Your Plants Indoor With The Best Grow Tents