The four-lined plant bug is one of the most common pests in the garden. It likes to feed on more than 250 species of ornamental, woody and edible plants. 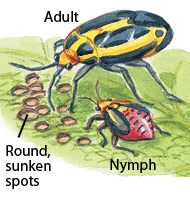 Damage from this pest starts in late spring when plant foliage has emerged and eggs hatch. Nymphs look like tiny adults but are bright red to orange with black wing pads. Over a period of about six weeks and several molts, the four-lined plant bug gradually changes color. Adults are yellow to chartreuse with, you guessed it, four black lines running down the wing covers on their backs. Since mature bugs have wings, they move from plant to plant, feeding for about a month until they mate. After mating, the female cuts a small slit in a plant stem to make a winter home for her cluster of eggs. By midsummer most of the adults have died. There’s just one generation of four-lined plant bugs each year.

DAMAGE — You’ll know four-lined plant bugs are around if you see tiny round sunken spots that are brown to translucent on the foliage of your plants. With heavy damage, the leaves might be distorted or curled.

Damage is often mistaken for leaf spot disease. But foliar disease spots from fungi or bacteria are irregular, and the marks left by the four-lined plant bugs are almost uniform in shape and size.

CONTROL — What can you do to get rid of this hungry insect? Start checking your garden in spring for damage. Since the nymphs can’t fly, their damage tends to be clustered in one area. And it’s easier to get rid of them while they’re less mobile. But whether you have nymphs or adults, the most environmentally friendly way to remove these unwelcome pests is with a few sprays of insecticidal soap.

Make the Most of Summer With the Best Tomato Seeds

Achieve a Green Thumb With the Best Citrus Tree Fertilizers

Hone Your Green Thumb With the Best Watermelon Seeds

Grow Your Own Produce With the Best Indoor Pepper Growing Kits

The Best Solar Lamps to Illuminate Your Driveway and Walkway

The Best Avocado Growing Kits for Your Home Garden

Protect Your Garden Plants From Damage With the Best Shrub Guards

The Best Plant Protectors for Safeguarding Your Garden From Damage

Home Gardening Essentials: The Best Watering Stake for Your Garden

The Best Topsoil for a Fruitful Gardening Experience

Tidy Up Your Garden With Help From the Best Yard Rakes