Why harvest basil yourself when you can ask your teenager to do it?

Where I live, it’s the dead of winter. Out my kitchen window right this very minute, my garden is bare and buried under a mountain of snow. Since it’s cold and dreary, I thought it might warm our cold, dead hearts to hear a funny garden story from last summer. Maybe put on some Van Morrison Days Like This and we can pretend it’s July for a minute.

One summer evening I decided to make homemade margarita pizza to put a dent in the 5 million cherry tomatoes I had picked earlier that morning. I asked my son to go to the garden and pick a handful of basil because pizza is 100 percent more delicious with freshly picked basil.

Because he’s a teenager, he looked at me with a blank stare, probably in hopes I would be annoyed and move on to the next kid in the family. But I ignored his slow blinking and continued because he was the lucky kid who happened to be walking through the kitchen in my time of need. I believe my exact instructions to him were: “First garden bed, left side, lift the cherry tomatoes off the basil, bring me 15 or 20 leaves. Oh, and thank you.”

The only reason I gave him any directions at all was that the cherry tomatoes had gone bonkers and were trying to take over the entire garden bed, so the basil was easy to miss. Because the boy has helped me in the garden since he was a toddler and because he’s eaten basil approximately a million times in his 14 years, it should have been a straightforward task, right? Wrong, friends.

As I was pressing pizza dough into the cast-iron skillet, I happened to catch my cherub standing at the back of the garden. It didn’t seem he’d followed my directions at all. In fact, he was at the back bed, right side, in front of six enormous pepper plants. And he was ripping off their leaves.

“Stop!” I yelled from the patio. “What are you doing?”

“Picking basil,” he grumbled. He’s picked something, alright, but as he came closer, I could see that he had ripped off almost all the leaves of a jalapeno plant.

“Yes, it is,” he argued, but at that point even he had doubts because of the jalapeno stuck in the bunch of leaves.

“Did the jalapenos hanging off the ‘basil’ plant tip you off that maybe it wasn’t the right plant? Or maybe that I said first bed, left side, under the cherry tomatoes?” I continued.

“You never mentioned tomatoes,” he grumbled again in true teen fashion. I would like to say I was mature enough not to engage in a “Mom said/Mom didn’t say” argument loop for several minutes in the backyard, but that would be a lie.

“And look,” I said as I picked some actual basil, rubbed it between my fingers, and held it out to him. “When you crumple the leaves, it should smell like basil. Now please pick me some basil and I’ll see you inside.”

From my kitchen window, I watched as he begrudgingly picked two handfuls of basil he found under the cherry tomatoes, and even sniffed the leaves to make sure. 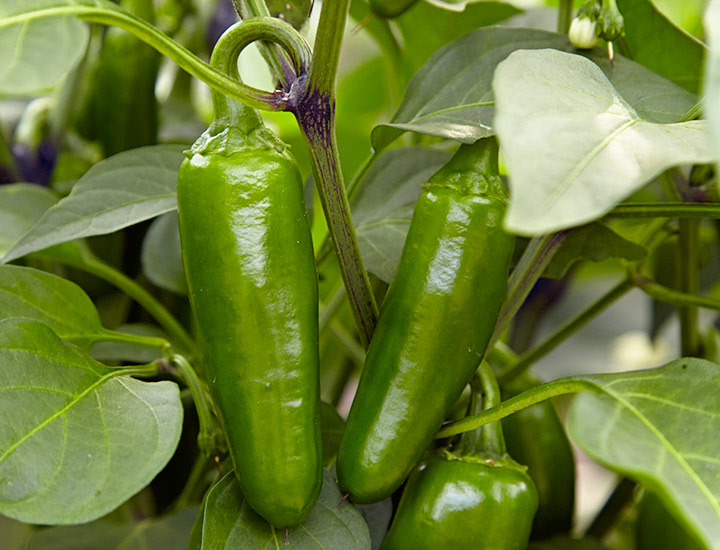 If you’re new to gardening or if you ask a 14-year-old to gather you some basil, remember these two things to ensure you’re gathering the right herb next summer:

1. It will smell like delicious when you rub a leaf.
2. It won’t have fat jalapeño growing on the same plant.

When Jamie isn’t perfecting her homemade deep dish margarita pizza recipe, you can find her doing yoga on her patio and counting down the days until her lilacs bloom.

You Might Also Like:
How to Grow Basil
Seed-Starting Tips from Our Readers
How to Start Seeds Indoors
7 Easy Plants to Start From Seed

herbs in the weeds vegetables

Did I Plant That? | In the Weeds

The Apple Tree | In the Weeds

Grandma Knows Best | In the Weeds

In our newest column, In the Weeds, Jamie takes a look at the light-hearted side of gardening.